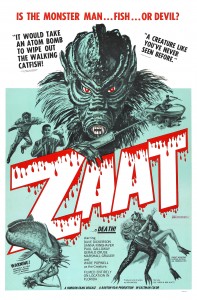 The plot involves . . . wait, there IS no plot! Something about a guy dressed in a real ugly, stupid monster suit from the 1920’s and a bunch of badly linked episodes. The monster steals a few stupid women, trashes a store, eats medicine, and kills some people for EXTREMELY trivial reasons. When he attacks a scientist and his kids fishing, two of them just disappear, while the daughter crawls ashore. Then the monster “attacks” her and just brushes the back of his hand on her stomach/chest and she dies.

The film opens like it will be promising as a camp flick(not to mention the bounty of riffing material for Mike, Tom, and Crow), with an instantly dislikable balding doctor (who later becomes the abovementioned monster) rambling on and on about fish (“they think I’m insane . . . but THEY’RE the ones who are insane!!!!”). Then a shot of him walking into his labratory while a corny folk rock song plays with horrible though unintelligible lyrics. However, instead of being fun, it quickly degenerates into mind-numbing boredom. The “heroes” are your typical Southern sheriff, a lifeless black scientist guy, and two “agents” of some thing that do nothing (well, the woman becomes monster boy’s slave). And did I mention that there’s maybe fifteen lines of dialogue throughout. None of the characters are least bit developed, or even speak with any emotion.

Despite the promising opening, MST3K had a hit-and-miss job with this one, though you can’t deny that lines like “The door was locked, but he had the powerful forearms of a CATFISH!” and their commentary on the “Invisible Cracker Mom and Her Invisible Cracker Car” are side-splittingly funny. Fortunately, many of their host segments (especially the one where Crow wedges himself in the ceiling of the SOL and impersonates the narrator [“Ah, my friend the squeege . . . I love you!”]) are among the best in the series.