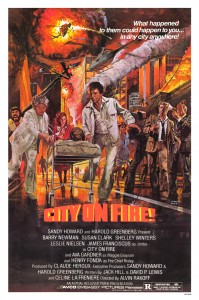 Not the lemon it’s often branded, “City on Fire” is an entertaining Canadian disaster movie with a capable cast, some good sets and special effects, and better than average dialogue. Two separate fires converge to create an inferno of biblical proportions, with various notables becoming victims. The plot focuses on a disgruntled oil refinery employee (Welsh) who triggers one of the blazes, while in another part of the city, pre-pubescent kids discover that cigarettes really do kill. Local surgeon’s (dependable Barry Newman) disenchantment with bureaucracy, goes on temporary hiatus as he tries to save his hospital, that lies in the path of destruction. His valiant efforts hampered by the mayor’s (Nielsen) ill advised attempts to achieve martyrdom, spurred on by the lure of the polls.

Sad Ava Gardner plays an alcoholic has-been news anchor, a timely reflection of her status as a faded Hollywood star at the time, while James Franciscus is wasted in a frivolous supporting role as her line producer. Many recognisable local faces fill out the peripheral roles (Donat, Linder, James), and heavyweights Winters and Fonda provide nice human touches to their dedicated civil servant types. Overall, there’s plenty of coverage and a nice symmetry between the righteous and the wrongdoers. Unlike “Towering Inferno” the varnish has been stripped by the flames, and there’s no holding back on special effects – as such, expect to see a few gory burns victims.

Not overlong, perhaps not unrealistic (so the tag-line warns anyway), and certainly not as clichéd as most disaster movies, “City on Fire” is an involving film with some impressive credentials and doesn’t warrant the unfavourable response it often garners. It’s not as sophisticated or indeed convoluted as “Backdraft”, but is perhaps an improvement on the Irwin Allen production line that had a mortgage on this genre throughout the 70’s. So give this so-called lemon a try and I think you’ll find the juice is worth the squeeze.