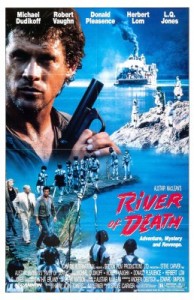 Director Steve Carver! Action star Michael Dudikoff! An action adventure delight!? Throw in actors Donald Pleasance, Robert Vaughn (both playing Nazis), Herbert Lom and L.Q Jones. Sounding good. Set in the Amazon jungle with its many beauties and but also constant dangers. Oh this should be humidly exciting, but the cheaply produced Cannon production shortly gave way for complete tedium. Carver… tedium? No way. Dudikoff… tedium? Can’t be. But it’s a yes indeed. Well more so the first 45 minutes (although within that time we are treated with some midget boxing and the intro is cool enough with its atmospheric score) and after that it somewhat picks up in something of a stop and go affair. It took me two sittings to watch it, as the first time I could only get halfway through it before dozing off. Lucky I recorded so I could sit there and try to watch it again, but it did kind of get better the further along it went.

Dudikoff plays Hamilton an adventurer who becomes an Amazon guide for a doctor and his daughter in their quest to find the origins of a deadly disease that’s affecting the natives. There they end up at the lost city, where the doctor is killed and the daughter captured. Hamilton manages to escape and barely makes back to civilisation. There he recovers, gathers a team and heads back to rescue the girl… but others in the party have their own motivations (gold, justice and revenge–hurt feelings) especially the man (Donald Pleasance) backing the expedition who believes a Third Reich Nazi doctor (Robert Vaughn) hides out in the lost city continuing his sadistic experiments.

The plot is adapted of an Alistair MacLean novel and it comes across as dumb low-grade pulp. It throws around shadily random developments, growing mystic, devious twists (whom playing whom?) and one-note characters (who seem to be looking for death) in a very muddled, paper-thin fashion. Very talkie at times, sluggishly paced and constantly inconsistent, but the action does have its moments. Probably a little too repetitive and not as explosive (but there are numerous explosions). Still it’s gritty and unpleasant, as the party when they not flying, hiking or using their riverboat they are thwarted by Amazon pirates, aggressive natives and of course evil Nazis led by a mad scientist (Vaughn is simply wasted here) who just wants to take over the world. Pleasance (who masterfully hams it up “Hey Wolfie”) and Vaughn’s exchanges are just odd, mainly in the opening sequences which do set everything up. Vaughn’s blank, cold-hearted turn suit’s the character, but was he really acting. Hard to tell. Dudikoff is acceptable, always having that concern look on his face. Maybe info overload. It was better when he stop thinking and went heroic — a prophecy in the making. But it wasn’t as funny as his croaky narration… please somebody hand him a cough lolly. Director Carver (“An Eye for an Eye (1981)” & “Lone Wolf McQuade (1983)”) crafts out an old-fashion stapling, where it’s resourcefully executed but lacking the energy and ticker to sustain its long-winded running-time. When not using staged sets, he makes good use of it sweaty locations (South Africa) with some nice scenic shots.