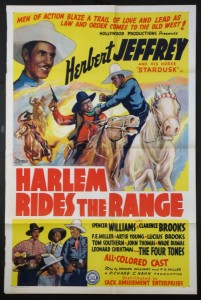 Immediately noticeable in the opening credits was the name Spencer Williams, Jr. This should have been a guarantee of good quality, but Mr. Williams’ acting skill was not matched by much of the cast nor was his screenplay as good as it could have been. The premise of the story was standard, and the dialog was at times too simple as if it had been written quickly with intent to fix it later. Some scenes had clever or natural spoken parts along with attempted humor that was consistent with other B westerns. Too often the actors spoke far too simple lines with far too long pauses between lines. Too bad.

Talent as a singer, rodeo champion, or athlete does not always qualify one to attempt acting as many movie cowboys had done. Often it was acceptable as a matter of authentication for the real cowboy to make it as a western movie actor. The same leniency is afforded to singers who make the leap into acting. Herb Jeffries and the Four Tones were definitely capable singers. Acting was not their forte. Sadly, the same is true for much of the cast. Herb Jeffries looked good as he filled the cowboy suit, and his acting was no worse than early Gene Autry entries into motion pictures. Maybe it was a little worse, but it worked for a cowboy movie. As the faithful sidekick, Dusty, Lucius Brooks had a likable presence that paralleled many sidekick performers. Perhaps if there had been more acting opportunities he could have become a better actor.

Musically, this movie had three song performances including the opening credits. It fit the feel of western music while the Four Tones added an Ink Spots style. Mr. Jeffries singing voice put him among the better cowboy singers. Had he wanted to continue to build a larger repertoire in the western music field he would be admired for that work today. We are all lucky that he left movies to work with Duke Ellington.

As Bob Blake, Jeffries is the hero of Harlem Rides The Range while the actual heroism is shared between Blake and Cactus (John Thomas). Blake is the singing cowboy dressed better than everyone else as he investigates a possible crime and pursues the only girl in the movie. Cactus is the vigilant ranch hand who ultimately delivers justice with a gun. While Blake plays the happy cowboy, Cactus plays the determined man of righteous pursuit. Had the two characters been combined the viewer would have seen a character closer to Hopalong Cassidy or Buck Jones.

As a B western, Harlem Rides The Range is an average movie. It is enjoyable, just not outstanding.