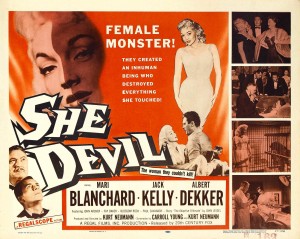 Director Kurt Neumann had a lot of enthusiasm for the potential of science fiction movies, but he didn’t quite seem to have the talents (or the budgets) to make consistently good ones. He seems to have plenty of intelligence – hence adopting a story with the fascinating idea of seeing what would happen if a human being were injected with a serum that enables her to “adapt” to any threat or environment – but he didn’t seem to be able to create scenes without tons of expository dialog, or patch the enormous plot holes in the screenplays.

She Devil…it has its moments. As a friend said, someone ought to give Albert Dekker the Purple Heart Actor’s awards for his valiant attempts to soldier on as he is forced to deliver line after line of clunky dialog in scenes that are going nowhere. And there are some good framing shots and set ups here and there – at times the actress who plays the woman test subject does manage to project a chilly, barely human glamour that makes you believe that she could take a man for everything and kill him once she was bored with him.

But the screen play asks the viewer to believe that a millionaire widow wouldn’t have a retinue of courtiers and employees and bodyguards who would follow her everywhere, and who wouldn’t make a major fuss when she went missing after she visits the two men in the world who created her and know her secret. And it wastes a lot of time foreshadowing a leopards presence in the lab without ever doing anything interesting.

Anyway…this what happens when you try to get by with one special effect (the woman seems to be able to change her hair color at will) and pretend you’ve created a movie about “ideas”…when you don’t know how to do anything really interesting with that idea.

Still way better than some of its contemporaries (dreck like “Voodoo Woman” make this look like Scorcese) and worth seeing once if you are fascinated by 50’s scifi.