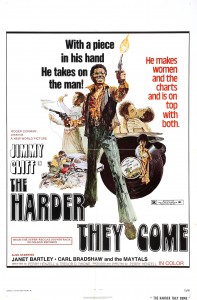 Ivan is a country boy in Jamaica who comes to see his Grandmother and `make it big’ by recording a record. However when he finds himself exploited by a record producer he turns to drug running to make money. When he kills a cop who is in on the trade he goes on the run and finds fame as an outlaw standing up against `the man’.

I first saw this in a cinema in 1995 and it was fully subtitled, I watched it again last night and it had no subtitles. It was slightly hard to follow some of the very thick dialogue so I suggest if you have the choice that you go for the subtitles unless patwa is a very familiar dialect to you.

The plot takes swipes at the exploitative music business but also the nature of celebrity and the problems of drugs. However at it’s heart it’s a reggae gangster movie that is gritty and enjoyable. The story is involving but really it’s the detail of the setting that carries the film. The camera allows a great sense of place and really captures the mood and place well, using crowd shots and wandering shots to music. Really the best scenes are all natural as music plays in the fore ground.

The music is one of the strongest aspects to the film – where the gangster element is sprawling and relaxed, the music allows us to accept this whole chilled out vibe as just part of the film. The cast also helps greatly by being very realistic without much effort, not trying to make the accent easier is a brave move if you want to sell the film! Cliff is easily believable and very watchable, likewise almost all the cast are great – many not being actors.

Overall the plot may wander in the way only a Jamaican can! But the music and the vibe more than make this a cult film that is well worth watching whether with subtitles or not!