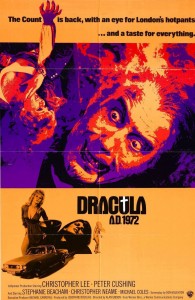 I actually enjoy this film a great deal and have watched it several times. Not because it’s a great film by any means, but just because there is something hugely enjoyable about it. It starts off well with the closing sequence of a film that was never made but which could, at a stretch, be perceived as related to ‘Taste the Blood of Dracula’. The Count and Van Helsing are caught in a death struggle atop a horse drawn coach hurtling through Hyde Park. We know that the Count ended up in England during Taste the Blood so it seems fitting that he has somehow been revived, headed for London, and come to the attention of his arch nemesis Van Helsing. Indeed, I would have liked to have seen the movie that I imagine this sequence to have come from. A disciple of the Count gathers up some of his remains and artifacts, proceeding to bury them just outside the walls of the graveyard where Van Helsing has just been interred. Their fate is sealed; somehow they will meet again!!!

OK, so it’s pretty much down hill from there, but it’s not an irreversible slope; there are still some decent moments to come. I find it quite interesting that Dracula remains in the old church, caught in a kind of time warp, almost oblivious to the strange new world outside. Also caught in a time warp are the group of young people on whom the majority of the story focuses; they seem already anachronistic in 1972, some of their references seeming around ten years out of date. Nonetheless they serve their purpose, which is slightly more evident in the recent DVD release that includes several scenes missing from other versions.

As usual the finished product differs from the original outline. For example there were plans to reveal that Dracula is, in fact, the Devil. An unfilmed piece of dialogue involved Dracula explaining his status to Johnny Alucard; ‘I was always here… Always… since the dawn of time. Since the rebel angels descended into hell. Since darkness followed light… I am Dracula, Lord of Darkness, Master of the Walking Dead! I am the Curse, the Apollyon, Angel of the Destroying Furies! I am the Apocalypse!’. Interesting because this film is often decried in comparison to those being produced in America within the next couple of years, most notably ‘The Exorcist’. Yet here were Hammer thinking of bringing Old Nick into the mix in 1972! Such lines were apparently dropped at Christopher Lee’s insistence due to the extent to which they removed the character from Stoker’s original concept, but aspects of this speech, or at least certain implications, are evident in the concluding stages of ‘The Satanic Rites of Dracula’. The vampire had been pretty successfully integrated into modern times by American film makers, the most notable examples being ‘Count Yorga, Vampire’, the excellent 1972 TV movie ‘The Night Stalker’ (pilot for the old TV show) and a couple of years later the much maligned, but actually pretty good, ‘Blacula’. But unlike these films, Hammer were agents of change in a different way; moving from Victorian Gothic romances to which movie goers had become accustomed over the past 14 years to an environment in which the loss of the Gothic could result in the loss of the audience, consequently the ruined and neglected St. Bartolph’s church successfully represents the death of the old and its imminent demolition suggests that there’s no going back, which, indeed, for Hammer, there really was not.

There is much to enjoy in this film; Lee and Cushing are, of course excellent, and some of the supporting players acquit themselves well. But now, I guess, one of its most appealing features is the sense of nostalgia it induces… it just seems like simple, harmless fun now.