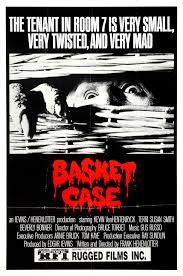 BASKET CASE is, for what it is, superb.

That’s not to say it is technically proficient or boasts particularly good performances from its actors. But it’s intelligent, creepy and viciously horrific.

A young man, Duane, enters a seedy Times Square motel carrying a large wicker basket. Inside the basket, as we soon discover, is his monstrously deformed Siamese twin brother, Belial. Belial looks like a twisted lump of fat and gristle, with two clawed arms and an eerily human-like face. He was, not so long ago, attached to his brother’s side, until his father and some crooked surgeons decided to seperate the brothers against their will. Now the pair is in Manhattan, to do away with the doctors who performed the operation.

The very premise is as bizarre and sordid as one can imagine. And the movie doesn’t disappoint. Everything is washed out with red and blue neon, every location is dirty and grungy, every character is twisted or crazed. The movie jerks the viewer’s emotions around brutally, going from silly to grim to nightmarish to funny to horrifying to tragic. It may take the movie a little while to sink in. If you allow it to, it will leave you speechless.