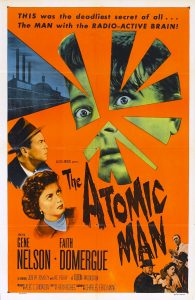 Ken Hughes directed five feature films and two short films in 1955, and this is one of the features. It is a superior B picture with the female B star, Faith Domergue, she of the big soulful brown eyes. The story and screenplay are by Charles Eric Maine, and he has written a good yarn. Some of the ideas for the technical background are mentioned in passing, and they concern a scientist named Stephen Rayner who works for the Atomic Energy authorities. He has learned how to achieve the alchemical transmutation of elements in order to produce tungsten in the laboratory from cheap materials. This threatens the interests of the United Tungsten Corporation of Argentina, which controls two thirds of the world’s tungsten supply, so they have another scientist’s face transformed by plastic surgery to replace Rayner, and the film starts with Rayner being shot one night and falling into the Thames.

He miraculously survives but is in a coma for some time while everyone is trying to figure out what happened. After he is identified, the police are puzzled because his employers say he is at work in his lab. Something strange has also happened to him because he has undergone a slight forward time-shift of 7.5 seconds due to exposure to radiation, so he answers questions put to him before they are asked. When the police and others finally figure out why his interviews don’t make any sense, because the answer to each question is really to one that will be asked next, they then begin to piece together his story. The film is very intriguing and entertaining, despite being low budget. The hints of escaped corrupt Nazis in Argentina who will kill anyone who gets in their way were well understood in 1955, only ten years after the War. The film’s original release title was TIMESLIP, and it is under that title that the DVD is now once again available. As another reviewer says, this is not really a sci fi film but is an industrial espionage thriller with some intriguing sci fi background elements which are significantly under-developed. Both the timeslip angle and the tungsten angle could have been much better developed and turned into a much stronger film.