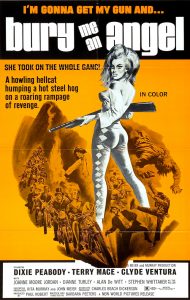 Fans of outlaw biker films heads up. Those who dig the revenge genre gather round. If you enjoyed Plan 9 From Outer Space this… wait a minute, where did everyone go?!

Well it begins with an overlong scene of 30 or so young hippie folk laying around a garage (literally, there are no chairs!) getting drunk, smoking herb, and making out. There is no dialog so it serves to establish that…. well I suppose that the biker heroine of the film is one groovin’ party host. Anyway, she and her brother go into the house to replenish the supply of brew when there’s a knock at the front door. Brother biker opens the door and has his head blown off by a dark figure with a shotgun. At this point one might question whether this is a comedic effort due to the technical expertise here, we see what is clearly a fake dummy head explode, followed by a shot of the actor falling to the floor with head intact! And so begins Bury Me An Angel, as biker chick Dixie P. bids farewell to her mother with a nod, a spit in her direction, and some choice expletives (endearing her even more to the audience) and speeds away on her bike towards revenge.

Along for the ride are 2 male friends, and the three encounter some zaniness along the way. Most notably a strange lady living in what is maybe a desert hotel or restaurant, really not sure what it was supposed to be, but in the film it looks like a 2 car garage with curtains. At any rate, desert lady shows them love and hospitality and then declares she’s a witch. The group is not hip to this and show skepticism, so the black magic broad starts with the psychic hot-line talk, “you have revenge in your heart” she tells Dixie. Well Broom Hilda might as well have described Dixie as 40 miles of bad road because she and her 2 pals go after the witch with a vicious verbal assault. The witch is unaffected by their tongue lashing, so Dixie snatches her spell writing hand and shoves it into the burning fireplace, but Zowee! Nothing Happens! She really is a witch they suddenly realize. For some reason the witch’s love, hospitality, and passive attitude angered the group, but the realization that she is actually a witch endears her to the three. It’s either that or the marijuana joint witch Zelda immediately produces saying “here, save this for the road, I have more” and they form a circle, fire up some wacky tabaccy, and all is well. The lesson learned? Nothing diffuses a dangerous situation from savage pothead bikers like an cannabis offering.

Parts of Bury Me An Angel are indeed dullsville, but there are enough oddball moments to recommend the film. The acting is what you might expect from a very low budget effort. Dixie Peabody’s performance is so so throughout, but she pulls one out of the hat with the final confrontation and it becomes a powerful moment believe it or not.