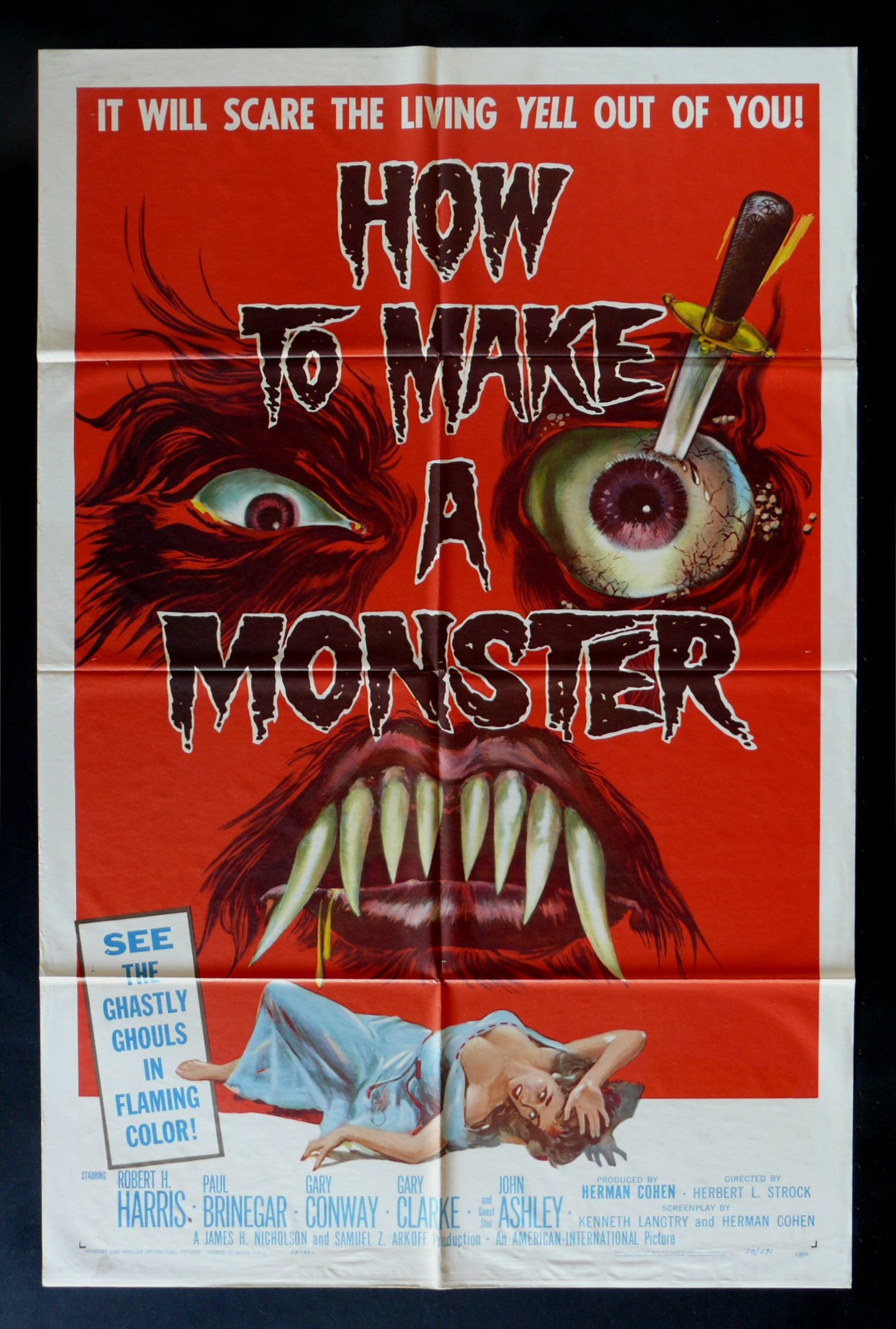 How to Make a Monster is an American International Pictures film about and set on the lot of American International Pictures. The premise is that the studio has been sold, and the new owners are going to make some major changes, including canning in-house employee Pete Dumond (Robert H. Harris), a noted master of horror make-up. It then becomes a relatively simple revenge flick, with a nice, slightly sci-fi twist in the method of revenge.

The idea behind this film is very clever. It also provided an effective means of saving money on the production, since not many sets had to be built or dressed, and even when that was necessary, AIP was able to use materials on hand from other films, such as the gallery of masks, in a way that makes this a self-referential treat for horror fans. The idea is good enough that especially in our modern era of film industry cannibalization, it’s surprising that it hasn’t been used far more often.

Aside from the admirable tightness of the script and the evergreen attraction of revenge films, How to Make a Monster works as well as it does because of the performances. Harris is a fairly subtle psycho, and extremely effective as an anti-hero. Especially in contemporary times, his situation–getting laid off after a company takeover–will find him many sympathizers, but it’s also that he plays the role with such a mellow, likable, grandfatherly charm, and a self-righteousness rooted in his expertise and pride in a job well done. As others have noted, there are subtexts in the film of (homo)sexual predation, which give an added air of creepiness to Harris. His unwitting targets on that end, Tony Mantell (Gary Conway) and Larry Drake (Gary Clarke), are played with an appropriate wide-eyed and willing innocence.

If there’s a flaw in How to Make a Monster it’s that nothing about it–except maybe the very final scene–is particularly atmospheric or suspenseful, but oddly, it really doesn’t matter, because it’s a good story told well enough that it keeps you engaged for its length. I still haven’t quite figured out why a few American International Pictures, including this one, I Was a Teenage Frankenstein (1957) and War of the Colossal Beast (1958), have the final scenes in color (I know it was a gimmick, but I don’t really get the attraction of it as a gimmick), but it doesn’t disrupt the flow of the film and it’s nice seeing the gallery of masks in color.