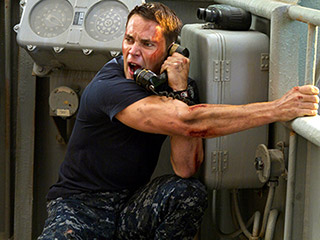 Battleship director Peter Berg has a rather amusing way of admitting that many people are skeptical about a movie based on a Hasbro board game: ”It didn’t lend itself to the most logical interpretation for a film.” But at the panel for Battleship at WonderCon in Anaheim, Calif., Berg seemed bound and determined to convince the crowd that there is in fact a strong movie tucked inside a game that consists of calling out coordinates to try to sink your buddy’s ships. Joined by costars Brooklyn Decker and Alexander Skarsgård, Berg pointed out that when you do end up hitting one of those plastic ships, you and your friend are “trying to kill each other as mercilessly as possible,” and that indeed does make for a compelling story.

Rather than prove his point by showing off more effects-heavy clips filled with explosions and CG carnage, however, Berg chose instead to screen two extended sequences from the film that showcase some far more small-scale moments. The first clip, in fact, practically had no major effects at all, instead focusing on the ne’er-do-well character played by Taylor Kitsch as he desperately tries to woo Decker’s character by breaking into a convenience store to get her a chicken burrito. Trust us: It plays a lot better in the room than on paper.

The second sequence, which comes much later in the film, gives us the first extended look at Rihanna’s big screen debut, as she and Kitsch hunt through their battleship for a metal-suited alien. There was little dialogue in the action-heavy sequence, so it wasn’t exactly an acting showcase, but it was all close-quarters work, getting the camera right up in the actors’ faces. And Rihanna did appear to acquit herself quite nicely, staying present in the moment and never giving off the vibe that she was a massive music mega-star slumming it as a military grunt. Berg himself sang her praises before the clip, noting that other music stars like Frank Sinatra, Whitney Houston, and Tim McGraw (in Berg’s big screen Friday Night Lights) have all successfully moved into feature films. “I believe musicians often make great actors,” he said. “[Rihanna] said, ‘Treat me like an actor.’ She worked her butt off.”

The extended clip also hinted at the larger story behind the invasion, which Berg told the audience was provoked by Earth sending out welcome signals to “goldilocks planets” that appear to have the same conditions for life as our own. (That’s a real program, by the way.) The clip opens with Kitsch and his mates inspecting a different alien who they’d fished out of the ocean. (SPOILER ALERT for the rest of this paragraph.) Kitsch briefly mind-melds with the creature, and what he sees either could be interpreted as the aliens’ plans for conquering Earth, or as this specific alien’s experience with being conquered, and his attempt to communicate to Kitsch that his ships, are, in fact, escape craft. I’m probably reading too much into it, but I definitely got the feeling that there may be more to these aliens than just world conquest. (End SPOILER ALERT.)

Berg finished up his time on stage by talking about the perils of shooting on the open sea. His father is a marine, and often took his family to maritime museums, so Berg has been wanting to make a movie about the navy for a long time. (He had long hoped to make a film based on Nathaniel Philbrick’s In the Heart of the Sea – about the lost whaling ship that inspired Moby Dick — but the cannibalism in the true story apparently was a bridge too far for Hollywood studios.) But as he began planning to shoot Battleship in the Pacific Ocean off of Hawaii, Berg says he got a call from an unexpected filmmaker: Kevin Costner.

“He said, ‘I feel compelled to come and talk to you about all the things we did right on Waterworld and all the things we did not so well,’” Berg explained to much knowing laughter from the crowd. Costner ended up talking for hours with Berg and his team, which Berg said was invaluable to feeling more prepared to take on the maritime production. One detail of Berg’s eventual shoot that stands out: Hiring snipers specifically to scout for sharks when the actors were in the water.