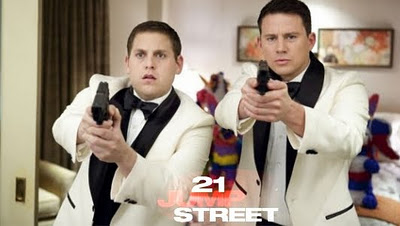 A comedy version of the TV undercover drama “21 Jump Street” is sneaking up on critics and earning strong reviews in its opening weekend.

Channing Tatum and Jonah Hill play police officers who pretend to be high school students to break up a drug ring. AP Movie Writer David Germain gave the movie two and a half stars out of four, saying: “The TV show that made Johnny Depp a star is little more than a jumping-off point for the big-screen `21 Jump Street,’ a rowdy, raunchy update that aims for laughs over action and delivers them intermittently.”

In limited release, “Jeff, Who Lives at Home” also has impressed critics. The latest from the writing-directing Duplass brothers stars Jason Segel as a slacker who turns a routine errand into an all-day adventure. AP Movie Critic Christy Lemire gave it three stars out of four, calling it “a sweet, slight tale told with simple intimacy and a deadpan tone to its absurd humor.”

Then there’s the Spanish-language comedy “Casa de mi Padre,” starring Will Ferrell as a dimwitted ranchero. Lemire gave it two stars out of four, saying: “The affection for B-movies and telenovelas is clear … but the premise, which would have been just fine as a sketch, feels as if it’s been stretched awfully thin to fill an entire feature.”

Here’s a look at how these movies and others fared on the top review websites as of Friday afternoon. Each score is the percentage of positive reviews for the film: