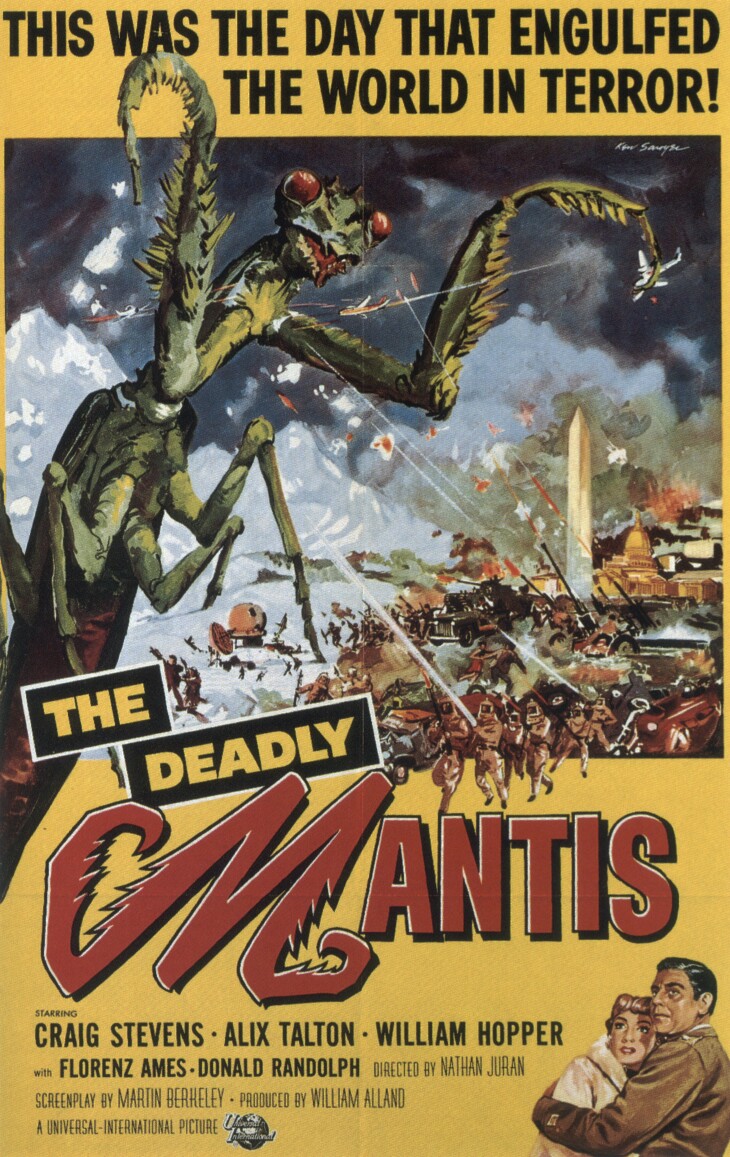 A volcanic eruption near the Antarctic circle causes an after-effect which triggers the release of a gigantic Prehistoric praying mantis, enclosed in ice centuries ago, in the Arctic circle. An outpost(Weather Shack) of a “dew line” radar system set up around the North Pole, is the first of many attacks by the flesh-eating insect(..with an insatiable appetite)which can leap, fly, and walk making it a dangerous and deadly threat to human civilization. A C-47 plane and an Eskimo village become other targets before Colonel Parkman(Craig Stevens), authority over a radar Interceptor base for the Dew Line(Red Eagel 1, “Sentinel of the Arctic”)built as a distant early warning system to cease sneak attacks by other hostile countries, and Dr. Nedrick Jackson, curator of the Department of Paleontology of the Museum of Natural History and chief scientist in his field, are called to stop the monster before it poses an even deadlier threat to the United States during it’s suggested path of a more tropic climate of South America. General Ford(Donald Randolph)of the Pentagon hopes they can stop it as the praying mantis sets it’s sights on Washington. The closing of the film is the mantis’ attacks on Washington before a showdown in the Manhattan tunnel between it against Parkman and his men.

While the low IMDb rating of 3.3 perplexes me, I’m guessing that a modern audience will find it hard to accept the monster for this movie. It’s not as realistic as the Harryhausen creations, but if you are a die-hard fan of these types of creature features, then “The Deadly Mantis” will provide a decent amount of entertainment. I thought the dialogue was literate and intelligent..those who wrote the script weren’t numskulls. The flick has a serious tone and is handled very matter-of-fact, and I think this can only help considering the hokey monster created on screen. You might call “The Deadly Mantis” a “second-tier” creature feature, as it doesn’t have the qualities of much better sci-fi/horror “giant insect” outings such as “Them” or “Tarantula.” Still, I think the cast is fine in their roles, enhancing the dialogue, bringing a bit of respectability to this B-movie item. I’ve seen a hell of a lot worse movies than this and, at the very least, the film uses stock footage well, juxtaposing it within the film rather seamlessly. Only major problem I had was that no insect, no matter how huge, could sustain the attacks of bullet-fire, missiles, and a flamethrower, not to mention the mini-mines used in the tunnel at the end. My favorite scene was the climax in the tunnel as the men try to stop the mantis as it emerges from the smoke. The special effects are a detriment that are awfully hard to overcome, specifically in the age of CGI. Alix Talton is Marge, a magazine photographer working with Jackson and the military, and a love-interest of Col. Parkman.