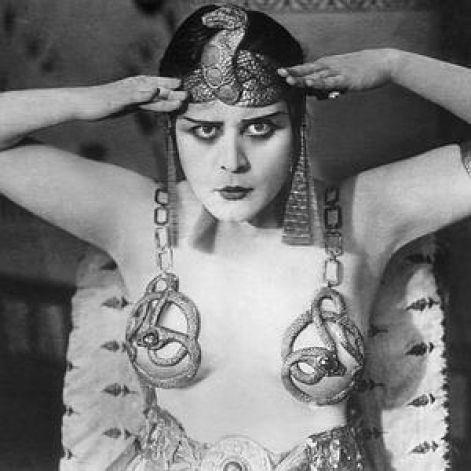 Theda Bara was born in Cincinnati, Ohio, as Theodosia Goodman, on July 29, 1885. She was the daughter of a local tailor and his wife. As a teenager Theda was interested in the theatrical arts and once she finished high school, she dyed her blond hair black and went in pursuit of her dream. By 1908 she was in New York in search of roles. That year she appeared in “The Devil”, a stage play. In 1911 she joined a touring company. After returning to New York in 1914, she began making the rounds of various casting offices in search of work, and was eventually hired to appear in The Stain (1914) as an extra, but she was placed so far in the background that she was not noticed on the screen. However, it was her ability to take direction which helped her gain the lead role as the “vampire” in A Fool There Was (1915) later that year, and “The Vamp” was born. It was a well-deserved break, because Theda was almost 30 years old, a time when younger women were always considered for lead roles. She became the screen’s first fabricated star. Publicists sent out press releases that Theda was the daughter of an artist and an Arabian princess, and that “Theda Bara” was an anagram for “Arab Death”–a far cry from her humble Jewish upbringing in Cincinnati. The public became fascinated with her–how could one resist an actress who allowed herself to be photographed with snakes and skulls? Theda’s second film, later that year for the newly formed Fox Studios, was as Celia Friedlander in Kreutzer Sonata (1915). Theda was hot property now and was to make six more films in 1915, finishing up with Carmen (1915/I). The next year would prove to be another busy one, with theater patrons being treated to eight Theda Bara films, all of which would make a great deal of money for Fox Films, and in 1917 Fox headed west to Califoria and took Theda with them. That year she starred in a mega-hit, Cleopatra (1917). This was quickly followed by The Rose of Blood (1917). In 1918 Theda wrote the story and starred as the Priestess in The Soul of Buddha (1918). After seven films in 1919, ending with The Lure of Ambition (1919), her contract was terminated by Fox, and her career never recovered. In 1921 she married director Charles Brabin and retired. In 1926 she made her last film, Madame Mystery (1926), and promptly went back into retirement, permanently, at the age of 41. She tried the stage briefly in the 1930s but nothing really set the fires burning. A movie based on her life was planned in the 1950s, but nothing ever came of it. On April 7, 1955, Theda Bara died of abdominal cancer at the age of 69 in Los Angeles, California. There has been no one like her since.