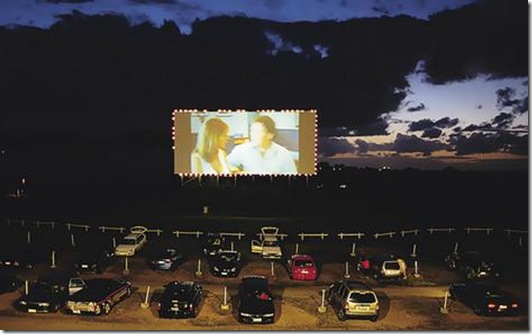 Open-air cinemas pop up all around Sydney, Australia as their summer rolls on (the reverse from us). Open air movies are hugely popular and it brings to mind that Australia was an early adopter of the drive-in theatre.

Australia’s first drive-in
Australia’s first drive-in was the Skyline which opened in the Melbourne suburb of Burwood on 18 February 1954 showing the musical comedy On the Riviera staring Danny Kaye. On the first night there was traffic chaos as 2,000 cars competed for the 600 spaces. After paying at the entrance you drove into the parking area and pulled up next to one of the many posts in rows all over the site. This post housed a pair of speakers with volume control which you’d attach to your car window.

Based on the drive-ins from the USA, families were encouraged to come early at 6.30 pm for a meal at the American-style snack bar complete with a juke box and let the kids loose in the playground in front of the big screen before the films started.

At the Burwood Skyline you could order hot dogs, hamburgers, soft drinks and candy just by pushing a button on the post. It lit up to alert an attendant to take your order and was delivered to your car from the snack bar by boys on bicycles. If rain threatened to spoil the evening, the car’s windscreen was coated with glycerine to stop raindrops from sticking to the glass. On cold misty nights the drive-in provided portable heaters around the site to clear away the fog.

A team of mechanics or ‘car hops’ were on hand to help cars with mechanical problems to leave at the end of the night, especially those whose batteries might have died. The Burwood Skyline’s policy was to admit all vehicles on wheels including motorcycles, vans or even horses and carts but not patrons on bicycles or scooters.

Not everyone loved the new drive-in. Local residents at Burwood wanted to take up a petition against it complaining about the ‘raucous noise and traffic congestion’.

Sydney’s drive-ins
During the 1950s, drive-in theatres began popping up all over Sydney. 60 years ago two Skyline drive-ins opened at the suburbs of Frenchs Forest and Dundas. The El Rancho drive-in at Fairfield opened a year later in 1957 with a Wild West theme complete with a chuck wagon for quick service meals, a ‘kiddies korral’ and brightly-costumed cowboys and cowgirls directing cars and providing service to patrons. By the mid-1960s Sydney also had Skylines at Bass Hill, Caringbah and North Ryde, a Metro-Twin at Chullora and the Star at Matraville.

Drive-ins were especially popular with young dating couples and those on first dates, providing much more privacy that the local cinema. For families it was a fairly inexpensive night out. The kids would come out in their pyjamas and would pile into the back seat on a mountain of pillows and blankets while parents didn’t have to go to the effort of dressing up. Cars full of teenagers would smuggle in a few extra friends for free by hiding them in the trunk or as they would say “ the boot” of the car.

Why did the drive-ins close?
Drive-ins were at their most popular in Australia during the 1950s and 1960s and it’s believed, at their peak, there were around 330 of them. By the 1970s color TV and later videos saw the popularity of drive-ins diminish. This may have been accentuated by the oil crisis and the introduction of daylight saving which meant the drive-in had to start too late for most families. Finally, the large expanse of land they occupied became too valuable and was sold off for parking lots, shopping centres, housing projects and apartments.

In 2016 there are only about a dozen drive-ins left in Australia with the largest one being the Luna at Dandenong in Victoria. It’s the oldest still in operation and now has four screens. Gone are the old speakers on posts. Movie soundtracks are delivered to your car by FM transmitters. Sydney’s last drive-in is the Skyline at Blacktown which underwent a makeover in 2013 with a new sound system and a 1950s-style diner. It’s said this venue is popular with both the young, who enjoy its novelty – especially the deckchairs in the ‘gold grass’ area in front of the big screen for walk-ins – and the old who love it for its nostalgia.

In Canada there’s fewer than 50 drive-ins left in Canada already, down from 250 in its heydays of the 1950s.