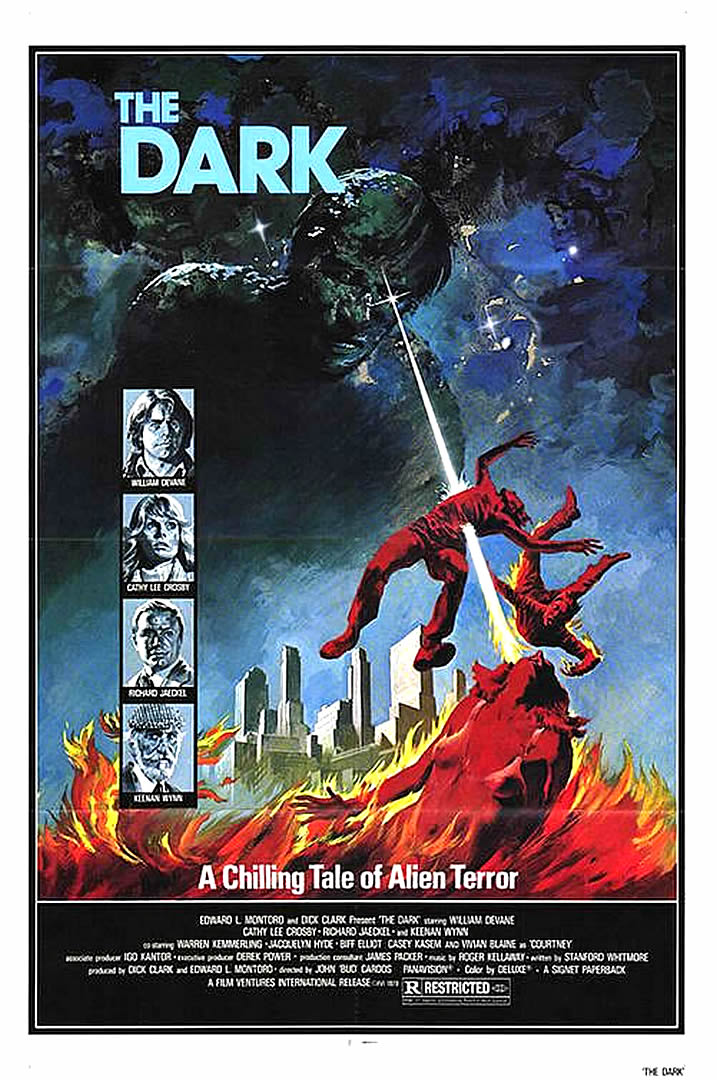 There’s a very thin line between cult-movies and bad B-movies. THE DARK constantly balances on that line, but when you make up the over-all score, it hopelessly falls into the latter category. It has definitely some elements that scream for cult-status recognition, but fails due to plot-stupidity, illogical events and dialogue-nonsense. And even though I liked it, at some moments, this is by no means a good movie.

The acting maybe isn’t too atrocious, but all the actors performances are just plain boring. The plot’s boring too for that matter. It has an alien man-thing running around in the city killing people for apparently no reason. At no point whatsoever we learn anything about this alien. The police-detectives, the writer/investigator (whose daughter was killed by the creature), the weird psychic lady,… they all don’t have a single clue about who’s doing all the killing, but strangely a bunch of demonstrating citizens figured out that it clearly must be a creature or monster of some sort. It makes no sense. Well, actually, it does make sense that this movie doesn’t make any sense when you read the trivia-section here on IMDb and find out that this movie originally was to be a zombie-movie. They re-edited it afterwards, adding footage and cheesy animated special effects, into a sci-fi/horror-flick. You can actually still see the alien stumbling around like a zombie in certain scenes.

But as a result we get to see an alien that isn’t a man in a laughable monster-suit, but a man with rather cool make-up. The scarcely lit close-ups of the alien are truly creepy. But the glowing eyes effects on the other hand are…, you guessed it: Cheesy. Aside from probably having one of the most appropriate titles ever (boy, this movie is dark!), it has something else going for it: The musical score, at times, is excellent and rather original. Along with some spooky violins you can hear voices whispering “Tenebreee…” and “Darknesss…”. To my knowledge this has only been done in Argento’s SUSPIRIA and the Friday THE 13TH-series.

To people who haven’t been digging deep into horror-movie-history, THE DARK will probably be a pretty bad B-movie. But I still think THE DARK is worth a watch, ’cause I consider it to be a C-movie. “C” for Curiosity. After watching it I found it rather strange that a 70’s movie like, for instance, Larry Cohen’s IT’S ALIVE developed a cult-status along the years and THE DARK didn’t. Oh, well, if you think the whole aimless-alien-loose-on-earth concept of THE DARK is fun, then you should try finding a copy of the so-bad-it’s-hilarious trashy sci-fi crap-fest NIGHTBEAST (1982).