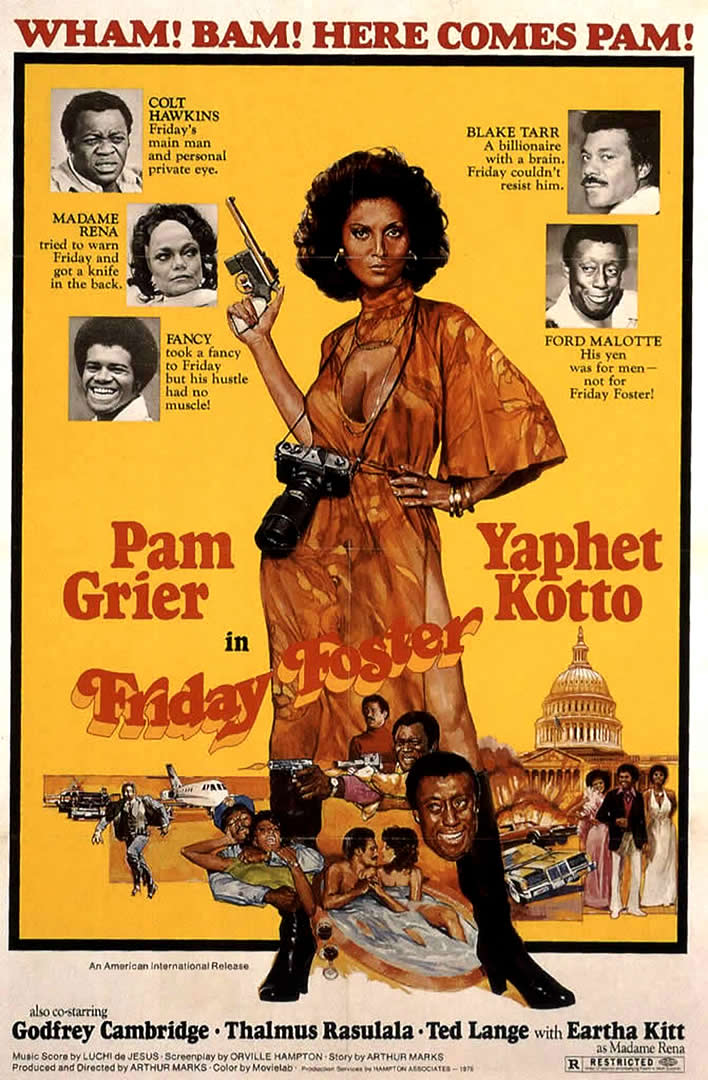 I’m sure many fans used to the action-packed Pam Grier flicks must have hated this film when it came out. FRIDAY FOSTER doesn’t feature Grier kicking ass or cussing out a criminal, but does have a great cast, excellent acting by Grier, and a funky score.

Grier stars as Friday Foster (real name? who knows?!), a photojournalist who becomes involved in a scheme to kill off all the black leaders of the world. Chasing criminals, sleeping with politicians, and brushing elbows with hired assassins, Friday saves the day and solves the case in the end.

OK, no Pam Grier kicking ass. So what? Here, this is where Grier got her acting chops. While previously in films like BLACK MAMA, WHITE MAMA, COFFY & FOXY BROWN, Grier was just a vehicle for action, here she is given a vivid character to perform with and does a superb job. Besides Grier, there are plenty of other blaxploitation regulars to savor: Godfrey Cambridge as a gay suspect; Eartha Kitt as Madame Rena, a flamboyant dress designer (always fun to see her); Carl Weathers as a hired assassin; Thalmus Rasulala as the richest black man in the world; Yaphet Kotto as Friday’s cop boyfriend (he’s great!); Scatman Crothers as a dirty old man preacher (criminally underused); and “Gilligan’s Island” regular Jim Backus in a cameo as a sleazy white politician. Also appearing is Tierre Turner, the annoying little kid from BUCKTOWN, as Friday’s kid brother.

While FRIDAY FOSTER might not be action-packed and an excellent Grier action vehicle, blaxploitation doesn’t get any better than this. I might even say this is Grier’s best 70s film besides COFFY, if only because she does her best acting job here. Recommended.