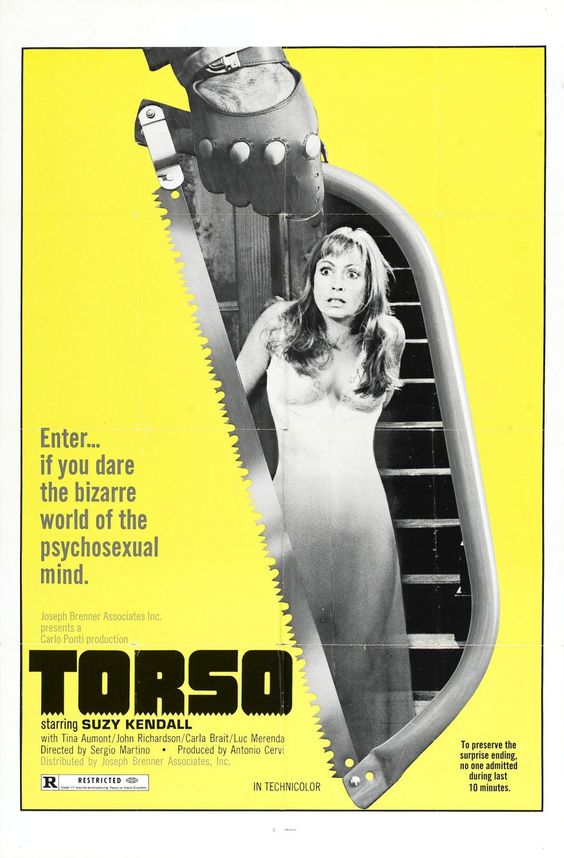 I Corpi Presentano Tracce di Violenza Carnale/Torso(1973) is an overlooked and stylish giallo that doesn’t get any respect. A portion of the people who responded to the film with negative comments are probably the same who thought that the Scream trilogy were clever and good. Sergio Martino fills the screen with beautiful women, black glove assassain, good music, and outstanding murder set pieces. I wouldn’t have like this film if the director had done an Argento copycat.

Although the video is said to be uncut, it still has the look of a movie with some scenes trimmed. One example is the first murder. Another example is the murder of the woman in the woods. What also gives the impression of a trimmed film are the sudden jump cuts in certain spots during the movie.

Suzy Kendall and Tina Aumont are stunning as the main female characters. The murder of Dani is a little shocking because the film teases the viewer with the idea that she will be the main heroine. Torso(1973) seems to be the main blue print for the plot of Prom Night(1980)(another film that deals with a person who kills because of something from the past). Torso(1973) would provide an influence on American slasher flicks including Friday the 13th(1980), Friday the 13th Part 2(1981), Halloween(1978), I Know What You Did Last Summer(1997), Maniac(1980), My Bloody Valentine(1981), and Scream 2(1997).

The opening scene is shot with some terrific camera angles. Torso(1973) is one of the top ten giallos of the 1970’s. The combination of sex & violence in Torso(1973) is a prime example of the bread and butter of the genre. The scene where Suzy Kendall has to hide from the murderer is less on suspense and more on tension.

The murder scene in the woods is shot with an atmospheric touch. The musical score by the DeAngelis brothers is as good as anything by Goblin. The make up effects are above average. My favorite part are the final twenty minutes.

the story is well written by Ernesto Gastaldi who is also known for some memorable Italian flicks as The Horrible Dr. Hitchcock(Freda), The Whip and the Body(Bava), I am Sartana, Your Angel of Death(Carnimeo), and Sahara Cross(valerii). This is Martino’s third terrific giallo right after The Blade of the Ripper(1970), and The Tail of the Scorpion(1971). The image and sound of the video are terrific. There are some elements from the giallo format that the teen slasher genre has yet to pick up.