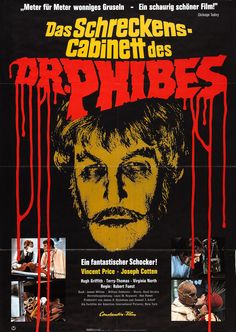 The Abominable Dr Phibes has achieved quite a cult status among horror fans, and for good reason; as this is one of the finest pieces of camp horror ever produced. The villain at the centre of the film – Dr Phibes – is one of horror cinema’s true villainous masterpieces. Unlike many of the not very well thought out villains that we see all too much of today, Dr Phibes is well-rounded concoction of evil. He has his reasons for killing – revenge, his killings certainly aren’t boring by any stretch of the imagination and even the man himself IS horror, as he’s a horrifically scarred madman that can only talk through use of a microphone connected to his throat. He surrounds himself with horrid looking camp items and has no care whatsoever for his fellow man. However, despite all these bad points that the man has – we are still able to care for his plight somewhat. Phibes isn’t someone that just kills for the fun of it; he’s distraught over the loss of his beloved, which puts the audience in a strange situation as we have decide whether or not there is a human being beyond this malicious facade. This madman is played by Vincent Price – who else? Price was born for this role and he makes it his own. Price embeds himself on your mind with this performance and it’s impossible to imagine anyone else playing Dr Phibes; and that is a sign of a great actor. Price has played many roles in the style of this character, but this is his best and I’d even go as far as to say that this is the quintessential Price performance.

The plot of The Abominable Dr Phibes follows the man of the title as he gets revenge on the doctors that he believes killed his wife after she was fatally injured in a tragic car accident (the same accident that got Phibes his own injuries). However, Phibes doesn’t want to get his revenge by any normal means. Guns, knives, axes etc are alien to this man, as he decides to take his revenge in the style of the ten deadly plagues of Egypt. The deaths scenes are ingenious to say the least, with the death in the style of the seventh plague being a particular highlight, which is sure to delight everyone that sees it. The film isn’t entirely serious, and is keen to make fun of it’s delicious plot. Peter Jeffrey, who plays the bumbling Inspector Trout who is assigned to the case is the source of most of the comedy and steals every scene he’s in. The comedy in the film is hilarious and provides a nice breather from macabre horror.

The Abominable Dr Phibes is most notable for it’s extreme camp style and has been touted as the campest film ever made by some critics. There is a very good reason for this assessment, as anyone that views it will be able to clearly see; but The Abominable Dr Phibes is more than just a camp horror film. Beyond it’s horrors, it’s a heart-warming tale of how a man deals with losing a loved one and is actually quite touching because of this. Well, maybe not touching; but the theme of loss is definitely there!