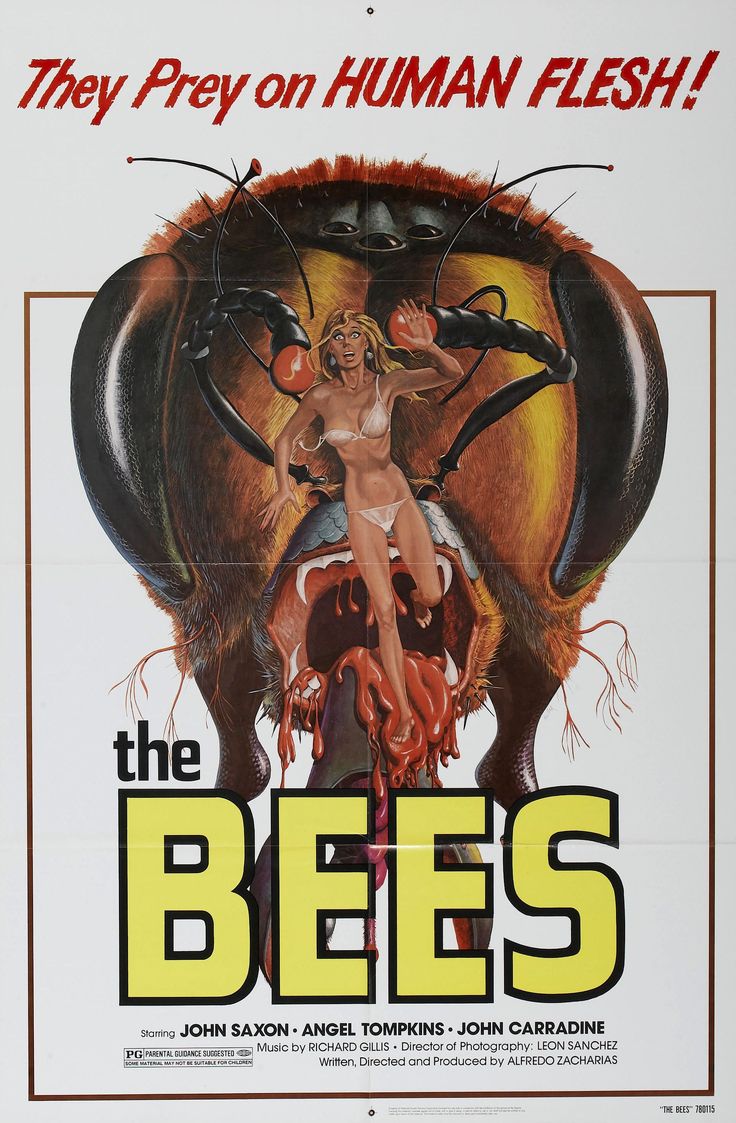 “The Bees” is a LOT of fun (but you have to be willing to go along for the ride and NOT take it seriously at all). Kind of a cross between a TV sitcom (like “Three’s Company”) and Irwin Allen’s (also laughable) “The Swarm”, remember: it’s all just goofy FUN.

John Saxon (the hardest working B (or bee) Movie Actor of the 70s), dishy Angel Tompkins, and John Carradine (looking quite frail as Tompkins uncle “Ziggy” with an utterly fraudulent German accent) form a team of bee experts whose research and chutzpah come to the rescue when huge swarms of killer bees make their way to the United States (via corporate greed), wreaking (laughable) havoc. Humor abounds (both intentional and, more significantly, unintentional). The results are cornball, played to the campy hilt by all involved.

The bee attacks are particularly amusing, underscored by goofy soundtrack music that goes disco at times when the bees get their close-ups. How can anyone not enjoy seeing the Rose Parade in Pasadena upset by an attack of the buzzing fiends? Face it, you WILL be rooting for the bees in this film, cheering them on as they go after the actors.

SPOILER ALERT (AS IF with a movie like THIS!)…That the solution for the bee problem involves using pheromone sprays to confuse the male drone bees, tricking them into mating with each other (essentially turning the bees GAY!), and thereby somehow rendering them sterile (huh???) kicks this one out of the field. But it doesn’t stop there…Saxon and Tompkins actually communicate with the bees and reach the United Nations to warn, “You have to listen! You have to listen to what the bees have to say!”

“The Bees” must bee seen to bee beelieeved!

Sure, the bee effects are hokey, but what would anyone honestly expect from a film like this? CGI??? This was 1978!

Worthy of rediscovery, “The Bees” is just good, old, grade-Z, 70s bad-movie fun. Great to heckle (a la MST3K) with a swarm of your best friends. (Liquor (or your vice of choice) is highly recommended. Perhaps toast each bee attack with “the bees knees” (a simple combination of gin plus honey, shaken with ice, strained, and served straight-up) a popular Prohibition-era drink from The Savoy Cocktail Book.)

Screen “The Bees” with any of your favorite bee-themed, B-Movies. Suggestions include: “Invasion of the Bee Girls” with honeys Victoria Vetri and Anitra Ford; Bruce Geller’s Emmy- winning “The Savage Bees” TV Movie; “The Killer Bees” starring Kate Jackson and Gloria Swanson (a must-see, if you can find it); or the hypnotic episode titled “Zzzzz” from “The Outer Limits” (original series, of course).