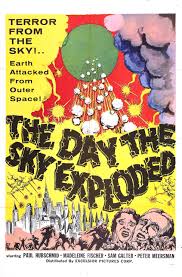 In a joint US/UK/USSR effort to send a man into space USAF pilot John McLaren, Paul Hubschmid, is chosen to go aboard the X/Z Atomic Rocket on a trip around the moon and back. As the X/Z approaches the moon it runs into technical troubles and McLaren together with his rocket cabin is ejected and lands back on earth with the X/Z’s atomic powered motor/engine exploding harmlessly in space, or so everyone thought.

The next few days strange things begin to happen back on earth that defy any explanation that modern science can provide. Birds and animals, even peoples pet dogs cats and canaries, start to act very weird. There’s a massive migrations all over the earth of wildlife away from any large body of water like the sea or the ocean or even big lakes and rivers. The sky starts to change in color at sundown and sunrise with this golden bronze and red haze and the moon itself becomes a blood-red illuminated sphere at night.

The magnetic pull from outer space, notably that of the moon, cause huge tidal waves and flooding of low lying areas and governments scientists and local astronomer pick up on radar this giant asteroid hurling itself towards earth. An asteroid one million times bigger then the one that struck in Siberia back in 1908 and wiped out hundreds of miles of woodlands.

It turns out that when McLaren ejected from his space-craft it went on into deep space until it hit the Delta Astorid Belt and dislodged a number it’s giant boulders. Causing them to travel in space towards both the earth and the moon attracted by their magnetic pull. Those boulders are now due to reach their destination with devastating force in less then a weeks time.

Good use of newsreel stock footage in this little known Sci-Fi movie that’s a lot like the more expensively made future disaster films like “Meteor” in 1979 and both “Deep Inpact” and “Armageddon” in 1998. With a top rate performance by Paul Hubschmid, also know previously as Paul Christian, as the air force pilot who was at first responsible for the space disaster to happen. And later was responsible for preventing it from destroying, by slamming into and pulverizing, the planet with the same element or force that initiated it; nuclear power.

Exciting conclusion with the top scientists an military men on earth using all the worlds atomic and hydrogen bombs packed onto fleets of intercontinental missiles. These missiles are then sent toward the deadly out-of-control giant