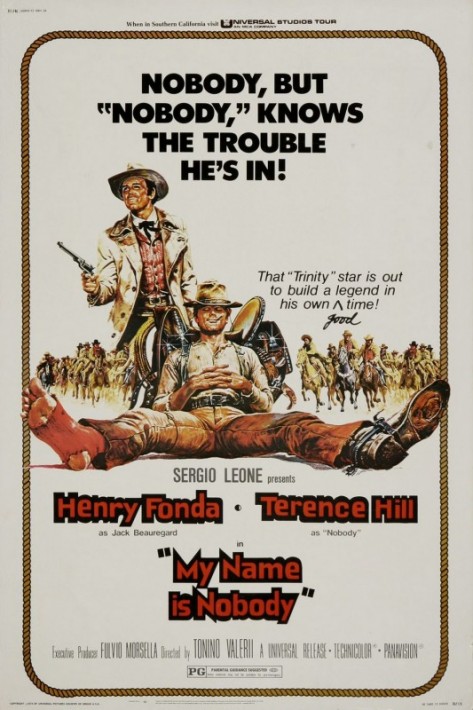 The story goes that Sergio Leone felt like he had to top the Italian box office earnings of “They Call Me Trinity” so he came up with the idea for “My Name is Nobody.” This lavish international production is a comedy about hero worship and a commentary about American westerns as much as it constitutes a comment about Spaghetti westerns. By the 1970s the Europeans had exhausted the western. According to Sir Christopher Frayling, the Spaghetti western had run its course and had slipped into self-parody, and “My Name is Nobody” exemplified the changing fortunes of the genre. If Clint Eastwood represented the serious, cynical Italian westerns as an iconic hero, then Terence Hill epitomized the low-brow, comedic Euro western hero. Indeed, Leone appropriates some of the things that made Nobody reminiscent of Trinity. Terence Hill drew his six-gun with blinding speed, and he wore his charisma on his sleeve. He was an extremely likable lad and you have to admire the lengths that his anonymous gunslinger went to so that he could immortalize his idol Jack Beauregard (Henry Fonda), a legendary gunslinger in his own right. Earlier, Fonda had played a cast-iron villain in Leone’s undisputed masterpiece “Once Upon a Time in the West,” but here he plays a good guy who is deadly swift on the draw. The problem is Jack is growing old and his sight is beginning to suffer. If any actor other than John Wayne represented the essence of the American western, it would have to be Henry Fonda. Fonda has starred in his share of classic oaters, among them “Fort Apache,” “The Oxbow Incident,” and “Warlock.” When he starred in Leone’s “Once Upon a Time in the West,” he played a villain as he would in a James Stewart western “Firecreek.” This movie is essentially the crossroads of two genres: the traditional American western crosses trails with the revisionist European western, and this distinguishes “My Name is Nobody.” It should come as no surprise that parts of “Nobody,” like “Once Upon a Time” were lensed in American and a large part of the cast is American. Although it is uneven and “Day of Anger” director Tonino Valerii lacks Leone’s operatic staging qualities, “My Name is Nobody” still emerges as a worthwhile western. Incidentally, Sergio Corbucci had used the idea as early as 1964 about a gunfighter with ailing eyesight in in “Minnesota Clay.” Anyway, Valerii worked with Leone, and he knew how to stage a scene and make it look good, but he doesn’t have the gimlet eye that Leone possessed. Moreover, Leone’s westerns and his crime movies are realistic, cynical, and mean-spirited. “My Name is Nobody” is more comic. For example, for sheer hilarity examine the wonderful whiskey glass shooting scene in the bar. Valerii does an exceptional job with it. The opening shoot-out in the barber shop is textbook Leone. The wide angle shot where you see Fonda shoot three men is spectacular. Reportedly, Leone is said to have staged it. Ennio Morricone provides a beautiful score, and the familiar western theme of an older man teaching a younger man is reversed here in classic style. Unlike the Henry Fonda/Tony Perkins’ western “The Tin Star,” where the older man saved the younger man, Nobody saves Jack Beauregard. Most Spaghetti western spoofs, like the “Trinity” movies were essentially hillbilly westerns with good jokes, “My Name is Nobody” is a comedy, but it has something serious to say. The dialogue is occasionally distinctive: “Two things go straight to a man’s heart: bullets and gold.” Leone and Vallerii scare up some veteran American character actors, including R.G. Armstrong, Leo Gordon, and Geoffrey Lewis. Sometimes, a scene or two will wear out its welcome, but considering the epic nature and the cinematic referencing, “My Name is Nobody” is a must-see for Spaghetti western fans and western movie fans in general.