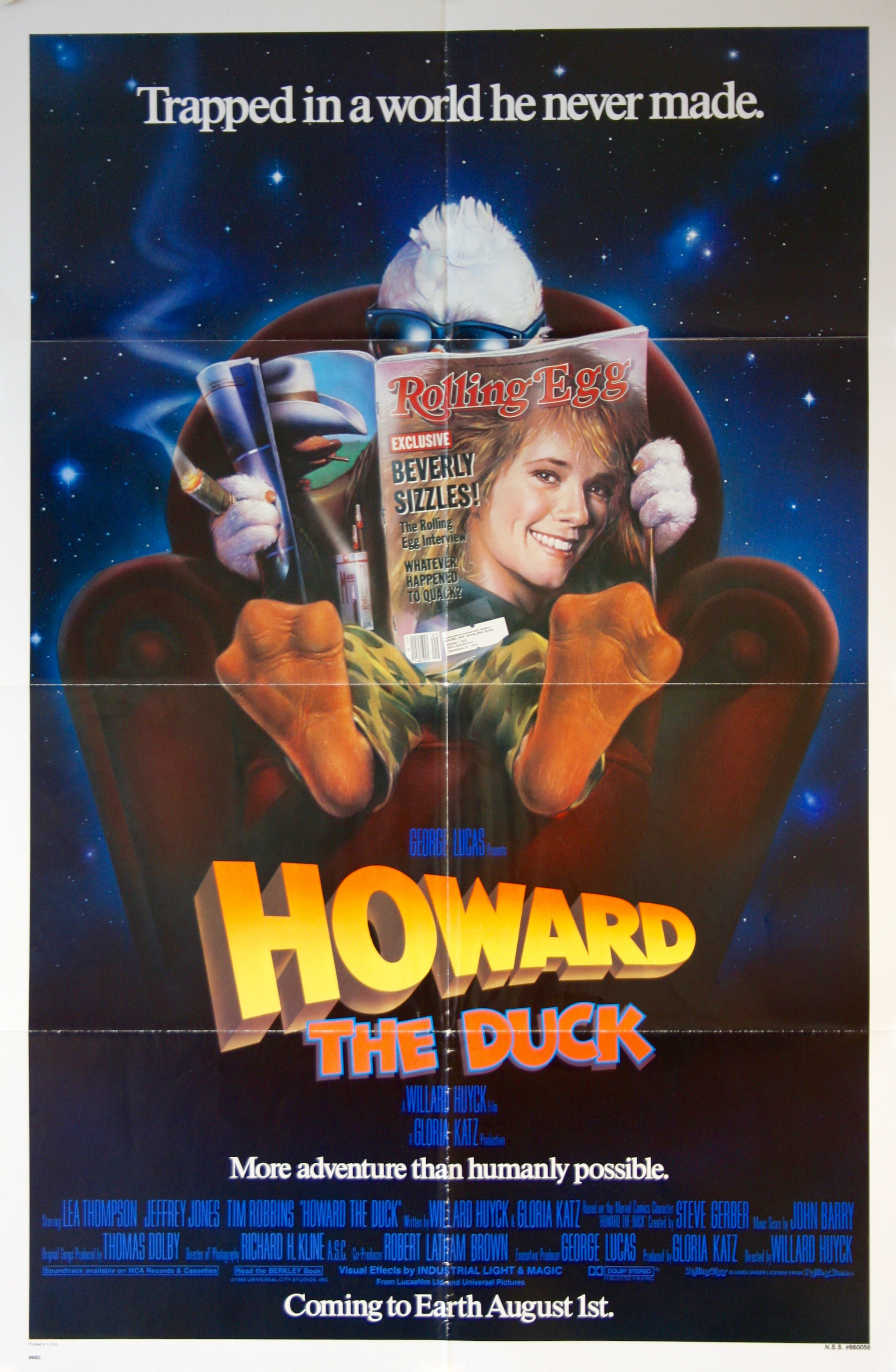 Considered one of the most notorious box-office flops in history (next to the ‘Road to Morocco’-ripoff ‘Ishtar’ with Dustin Hoffman and Warren Beatty the following year), ‘Howard the Duck’ became the laughing stock of critics and movie-goers alike when it was released in theaters in 1986. If its executive producer, George Lucas, had his way, he would have canned that movie for good. But thanks to the home video boom in the 1980s, ‘Howard’ would follow suit and find his way into video stores across America.

Nearly twenty years later, ‘Howard’ is slowly being pulled from video store shelves. But it is now that a film of such poor quality can be truly appreciated.

Here’s how it all goes down: You are dropped onto a planet from a far-away universe, where ducks are human-like and are running the world, only to be pulled out again moments later. An everyday working-duck by the name of Howard gets sucked out of his living room on his recliner after returning to his apartment after a long, hard day.

After the opening title is shown in the thundering tradition of cinematic heavyweights like ‘2001: A Space Odyssey’, we see Howard’s decent toward the planet Earth. Once he has reluctantly gotten his feet on the ground, he clashes with the dregs of society and saves the lead singer of an all-female punk band named Beverly, (played by ‘Back to the Future’s Lea Thompson). She tries to give him a hand, and help him get an explanation as to how he got sucked out of his living room and landed in Cleveland, Ohio.

That explanation never actually makes any sense, but that doesn’t matter, because better plot developments hinge upon it. With the help of a goofy lab janitor Phil (played by the immortal Tim Robbins in an early comedic role) and a big time nuclear scientist Dr. Jennings (none other than Jeffery Jones), Howard finds out that a giant laser Jennings was using went haywire, and pulled Howard down instead. But going back isn’t going to be so easy, because one of Dark Overlords of Evil hitched a ride on that laser, and has plans of planet domination and destruction. And who better than to save the day than the 3’1″ (3’2″, that is) wise-“quacking” title character, Howard T. Duck!

Although George Lucas got ripped apart for having his hands in this one, I have yet to see a movie that is so awful, so terribly bad that I have been brought to tears crying at simply recalling scenes from this flick. The opening sequences on the duck planet contain countless parodies of American pop culture, and Howard’s implausible hurtle through space is enough to make even the most serious chuckle.

Audiences back in 1986 didn’t seem to, however. But something about watching this flop nearly two decades later makes all of these scenes so much funnier. The way I see it, our teen generation now has a funny fascination with the decade in which they were born, the 80s, and anything from it has a distinctive look and sound. American pop culture was throwing away Three’s Company for MTV, LPs for tapes, and the Bee Gees for the Brat Pack. The youth took yet another step in distancing themselves from their parents, and although they furthered that schism, they too felt a strong connection the past few decades. What was happening when I was in utero? Taking my first steps? Saying my first words?

Today’s generation has ‘Howard the Duck’ as one of the most endangered time capsules of the 80s. You’ve got a one-of-a-kind performance by now Acadmey Award Winner Tim Robbins, whose his explanation of duck’s evolutionary scale is priceless. George Lucas’s own Industrial Light and Magic (ILM) special effects studio must be embarassed to have itself credited with the horrendous effects (the Dark Overlord, for one). You’ve got a helplessly catchy theme song, revelling in all of its cheesy 80s pop-synth glory.

The jokes are terrible, the dialogue sub-par, the plot laughable. But you know what, you’ll laugh you a$$ off.