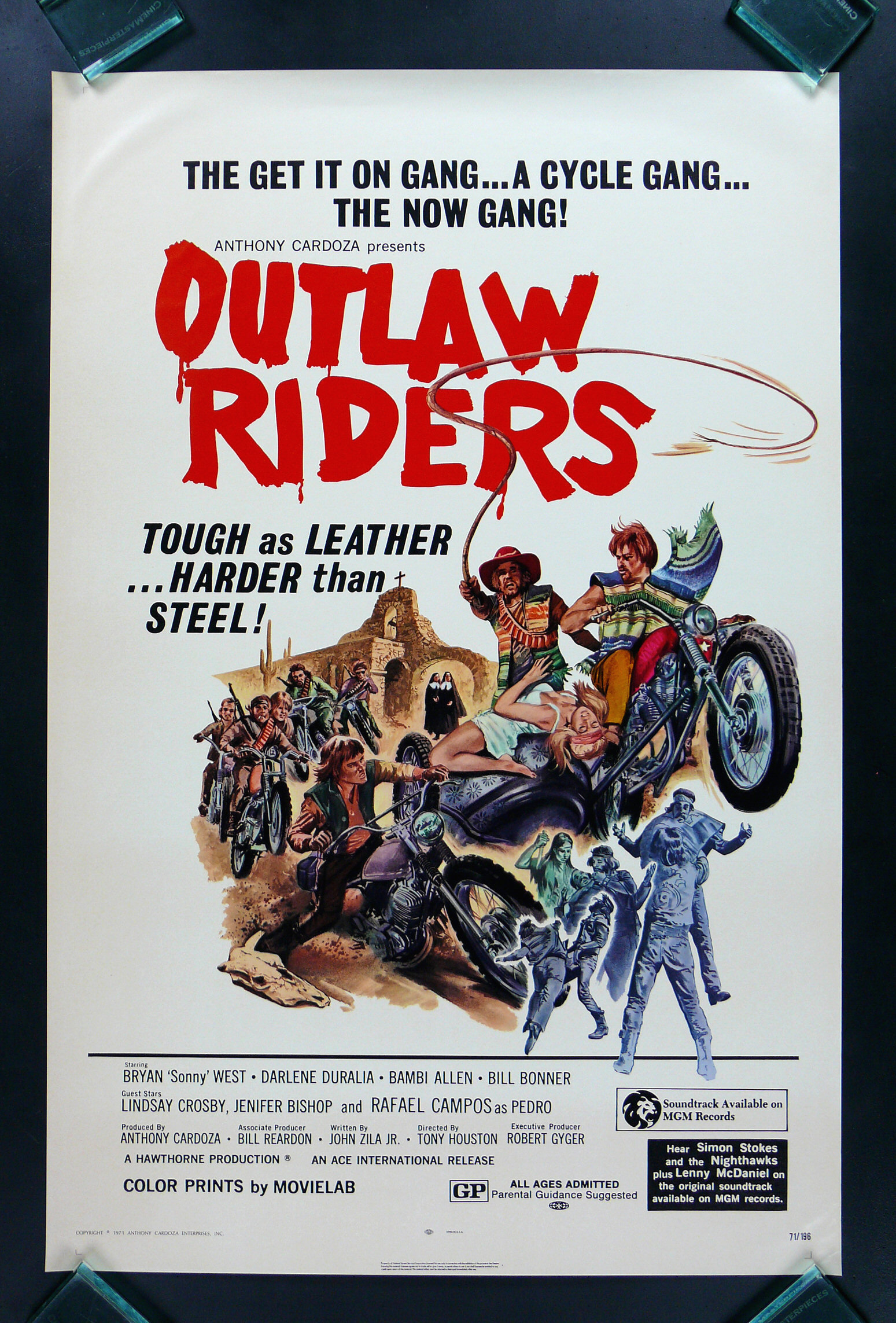 As biker movie fans are aware, they can vary tremendously in quality: there are the top-tier films that transcend the genre and demand classic status (THE WILD ANGELS, NORTHVILLE CEMETERY MASSACRE, HELLS ANGELS ON WHEELS), the middle-level offerings that wrestle with no profound issues but offer an hour and a half of action, violence, and sleazy fun (HELL’S ANGELS ’69, THE BORN LOSERS, CHROME AND HOT LEATHER), and the budget-challenged barrel scrapers that can test your endurance and attention span (NAKED ANGELS, HI-RIDERS, THE DIRT GANG). Unfortunately, while it has its entertaining moments, OUTLAW RIDERS is pretty firmly in the latter category.

OUTLAW RIDERS starts promisingly with then-trendy split-screen effects behind the opening credits—and a better-than-expected title theme song by Michael Lynch that rocks pretty hard in a Steppenwolf-ish vein—as biker gang leader Waco, played by Memphis Mafia honcho Bryan “Sonny” West (THE HELLCATS, BIGFOOT), and henchmen Beans (Robert Tessier, THE GLORY STOMPERS, RUN, ANGEL, RUN!), Chuck (William Bonner, THE GIRLS FROM THUNDER STRIP, THE HARD RIDE), and Lee (Lindsay Crosby, FREE GRASS, MURPH THE SURF) rob a payroll office in Fulton, Arizona. They ride around in the desert, get drunk (“nothing quite as groovy as a cold glass of beer”), and argue a lot, and Beans, chafing under Waco’s authority, challenges him by attempting to rape his chick Sharon (Darlene Duralia, THE INCREDIBLE 2-HEADED TRANSPLANT). Waco is later wounded in a shootout with police during an attempted bank robbery, and the gang seeks temporary refuge at a convent where Valda Hansen (NIGHT OF THE GHOULS) is one of the nuns (Chuck: “Weird people.” Sharon: “Yeah, but they’re, like, on our side.” Linda: “They’re on everybody’s side. Like, that’s their thing.”).

More extended riding around in the desert, this time to a lounge-style crooner (“Nothing to Talk About”). Chuck’s cycle breaks down, so Waco gives him a lift on his bike, which then runs out of gas, so they steal a couple of horses in a slow-motion sequence. Meanwhile, Linda begs Pedro to let her and Sharon go, Pedro molests Sharon, and Maria jumps into the fray (about the only moment of real drama or conflict in the movie). Pedro ties up Maria and slashes her face, at which point his lieutenant Manuel has had enough and attacks Pedro. In one of OUTLAW RIDERS’ more amusing moments, Waco and Chuck pile up boulders Wile E. Coyote–style and cause a rockslide on Pedro’s gang, then Waco and Pedro square off in a climactic dustup, and the movie ends with a pointless and unsatisfying shock/twist ending (so popular in the 1970s).

You know you’re in trouble as soon as you see Anthony Cardoza’s name as producer on OUTLAW RIDERS, the man behind such lovable atrocities as THE BEAST OF YUCCA FLATS, THE HELLCATS, and BIGFOOT (someone please put this out on DVD or Blu-ray!). In fact, OUTLAW RIDERS is a semi-remake of HELLCATS, which also concerned Mexican gangs kidnapping biker chicks to sell them into white slavery. Director Tony Houston will be familiar to DVD Drive-In readers for his acting roles in several of Larry Buchanan’s cheapie AIP remakes, including THE EYE CREATURES, ZONTAR: THE THING FROM VENUS, and MARS NEEDS WOMEN, and he was also on hand as assistant director on THE HELLCATS.

OUTLAW RIDERS is pretty thinly plotted, shall we say, with only enough story and action to fill a half-hour TV episode, its 81-minute running time padded out with lots of riding footage and real-time exposition. Rafael Campos (who was born in the Dominican Republic) provides some amusement with his incredibly over-the-top “Mexican” accent and hilariously unhinged performance as the whip-wielding psycho Pedro, and Maria’s jealousy over the gang’s nubile captives provides a few moments of welcome dramatic tension. However, unlike THE HELLCATS and most other typical biker pictures, little screen time is devoted to the usual hell-raising, making out, drug consumption, and mindless carousing. Instead, we get a couple of small-time robberies early on and seemingly endless traipsing around in the desert during the latter half of the movie, while Pedro screams at everybody in sight. Though most of the other original songs—four by L.A.’s Simon Stokes and The Nighthawks—don’t fare as well as the title theme, a soundtrack LP was actually released on MGM.