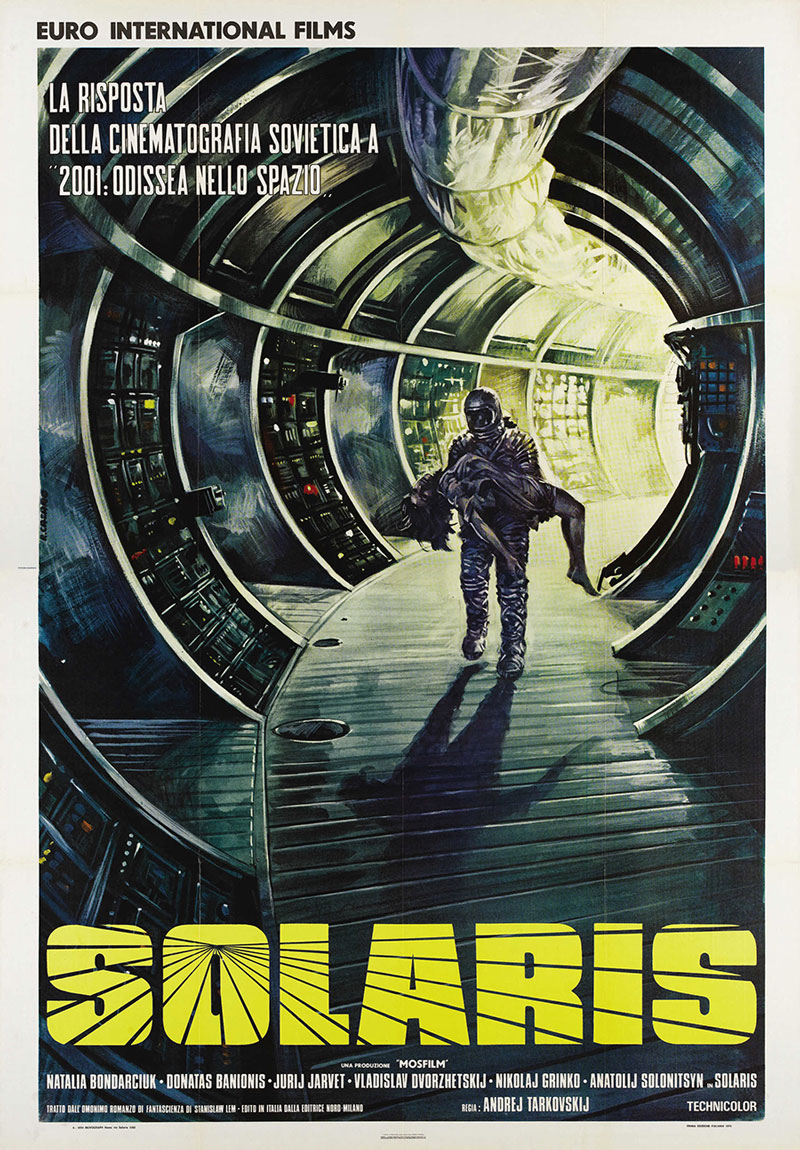 Often labeled as Russia’s answer to Kubrick’s “2001: A Space Odyssey”, Tarkovsky’s “Solyaris” is one of the most celebrated sci-fi movies in history and definitely Tarkovsky’s most famous film. However, and while Tarkovsky indeed stated that he disliked Kubrick’s Space Opera, “Solyaris” (“Solaris” in English) was not conceived as a science fiction film to react to “2001”, but as a meditative melodrama with psychological undertones that just happens to occur inside a Space Station. This disdain for the sci-fi elements earned Tarkovsky the enmity of “Solyaris”‘s source novel author, Stanislaw Lem; but also made the film a very personal work and one of the jewels of Russian modern cinema.

At its core, “Solyaris” is the story of psychiatrist Kris Kelvin (Donatas Banionis), who is sent to the station in planet Solaris to investigate the mystery surrounding the strange data the three surviving scientists in Solaris’ station are sending about the planet’s Ocean. At the space station, Kelvin receives the visit of his wife, Hari ( Natalya Bondarchuk), something that shocks Kelvin as his wife has been dead for 10 years. Somehow Solaris has created an apparently exact replica of Hari, but how? and more important, why?

As written above, “Solyaris” is not a typical sci-fi film and in this case, the whole Space setting is just that, a mere setting. “Solyaris” is a trip inwards instead of outwards as Kris Kelvin’s odyssey begins at Earth, inside of his troubled soul, the day before being sent to space. Unlike the source novel, where the focus was on humanity’s failed attempts to communicate with Solaris, the film is focused on Kris Kelvin’s relationship with the resurrected Hari, and the consequences of being faced with the chance to mend previous mistakes. Human relations, desires and conscience becomes the movie’s themes leaving science-fiction in the background.

The film conveys a juxtaposition of natural beauty and cold sterile “modernity”, probably to add strength to Tarkovsky’s disdain to science fiction. His characteristic use of extremely long takes (following his theory of “sculpting in time”) is ever present, but while it does indeed give his films a stunning beauty, at times “Solyaris” becomes tiring (although never boring). Probably this actually was the intended effect, as the film has time lost running as a constant theme through the film. With a very low-budget he builds up a science-fiction film that doesn’t want to be a science-fiction film, but that manages to be an intelligent and original entry in the genre.

The acting is overall very good, and even when Tarkovsky himself stated that he disliked Donatas Banionis’ performance as Kelvin I think that he was quite convincing and that he did a fine job. Natalya Bondarchuk as Hari (or better said, Hari’s replica), is a joy to watch, but even when her character is the important catalyst in Kelvin’s mind, the focus is always on him. Jüri Järvet and Anatoli Solonitsyn are Dr. Snaut and Dr Sarotious respectively, the two surviving scientists at Solaris. They have small roles, but both give awesome performances that give life to their supportive characters that made them unforgettable.

“Solyaris” is a complex movie with many layers that while a very rewarding and enlightening experience, may be too slow for modern audiences; to make things worse, Tarkovsky’s “sculpting in time” style goes a bit too far, making the film hard to sit trough for fans expecting a fast packed science-fiction film. Howere, despite all this, the film’s ambiguous nature and artistic beauty make it a delightful movie. Probably at times it may be too preachy, but it’s a great humanistic science-fiction tale.