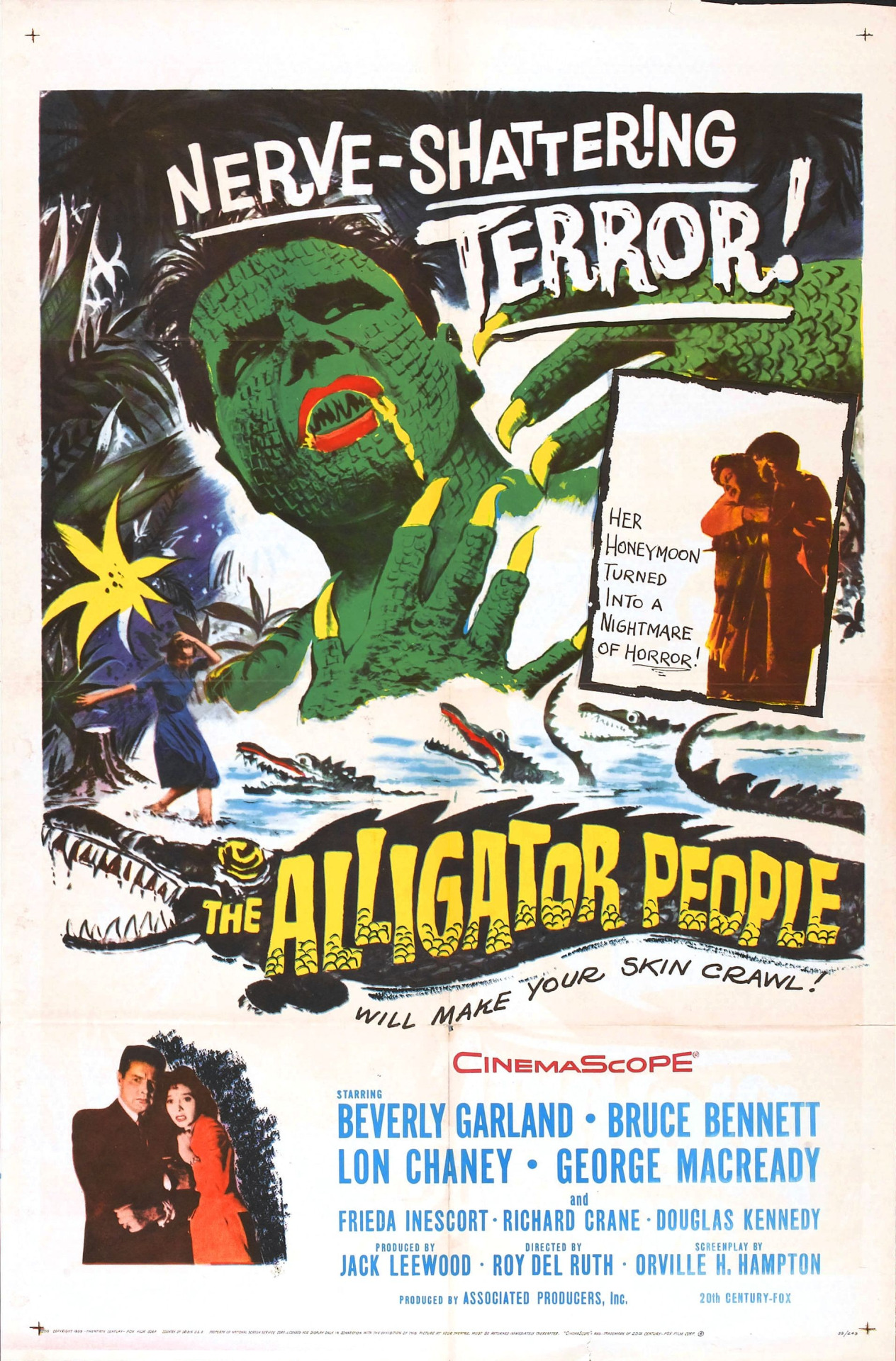 The movie is told entirely in flashback, as a woman under the 50s wonder drug sodium pentathol remembers her troubled past for two psychiatrists (Bennett and Kennedy) during an extended hypnosis session. Paul Webster (Crane) disappears suddenly on his honeymoon, and his wife (Garland) spends years searching for him, finally ending up at a mysterious (and very damp) plantation called The Cypresses in the bayous of Louisiana.

Frieda Inescort plays The Cypresses’ tyrannical matron, and is accompanied by her unhinged hired hand Chaney (who else?), the local “swamp doctor” Macready, and an assortment of other household helpers. Everyone keeps telling Garland to leave, so of course she stays, and eventually finds her husband…who has been partially turned into an alligator (no tail, just lots of scales)! It seems that Macready has been trying to help accident victims with some kind of alligator extract, and while the victims recover, well, there are some pretty bad side-effects. Besides being scaly and green (presumably, because this is a B&W movie), Crane also has a very deep, rumbling voice, which apparently happened when he received too much alligator hormone.

Macready has a bright idea that he can “cure” Crane through “massive radiation from a cobalt bomb”, the usual fun 1950s radiation treatment. But when Macready says, “No more than 30 seconds…I determined that with my test alligator!”, you know something is going to go wrong. At the critical moment during the treatment, Chaney bursts in, punches out the doctor, and manages to electrocute himself on Macready’s space-age equipment, but not before Crane has been turned into a true “gator-man”: big alligator head and scaly chest. The gator-man does, however, still have his neatly pressed trousers and belt on.

Crane runs into the swamp, followed by Garland (who apparently still loves him, even in his reptilian condition). A monstrous explosion destroys The Cypresses, and the gator-man promptly disappears in a convenient quicksand pit, leaving Garland to sit screaming in the middle of the swamp. Cut to Bennett and Kennedy, who have listened rather incredulously to the whole story…then simply decide to do nothing about the situation, thus ending the movie.

I have to admit, I’ve never seen a movie with a remotely comparable plot. Garland is her usual steady self, Crane hams it up as the gator-man, and Chaney…well, he chomps through the scenery with great enthusiasm. Macready, apparently thinking he may never again get the chance to play a mad doctor, becomes intensely philosophical at every turn, often staring off into space. Kennedy and Bennett spend most of the movie being baffled by Garland’s story, then after discussing it to death, just ignore the whole affair! Even with all of its weird ideas and strange acting, I liked The Alligator People. The bayou settings drip with perspiration and humidity, and the story is very imaginative. Every time there’s a slow spot, Chaney seems to burst in and liven things up. I just wish that the filmmakers had gotten a slightly better alligator suit.