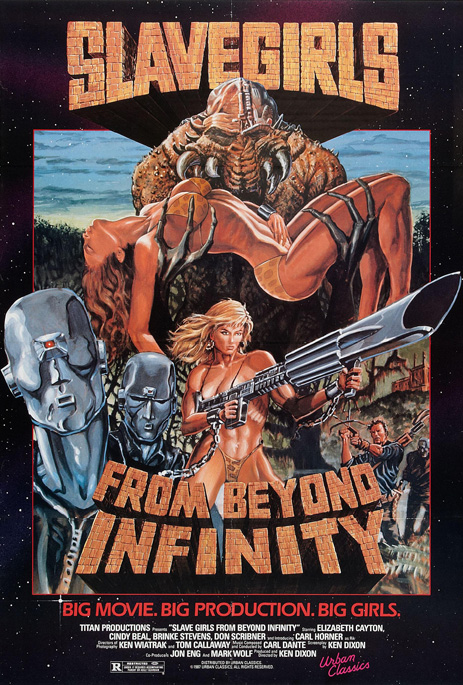 The movie starts out with the two girls, wearing leather bikinis, aboard a prison ship and being held in a cell lit only by a barred hole in the ceiling. Elizabeth Kaitan’s character is determined to break their chains and dash for freedom, and convinces Cindy Beal’s character to assist her. She does, they do, and they steal a small spacecraft to effect their escape into space whereupon they crash on a small planet.

Kaitan swims to shore but doesn’t see her compatriot. Still dazed by the crash, she stumbles through the jungle and finds a small castle inhabited by Don Scribner and his robot guards. He invites her in, shows her a room and gives her some clothing and she is reunited with Beal. At dinner, the two girls are introduced to a character played by Brinke Stevens and the character’s brother. Dinner-time chat turns to hunting and it is revealed that Scribner’s character lives for the thrill of the hunt.

Brinke and the brother were passengers on a ship that landed on the planet. The pilot, navigator, and crew have all disappeared since they came to Scribner’s mansion. If you’ve read “The Most Dangerous Game” this should sound familiar. Sure enough, Scribner has a habit of kidnapping his guests, giving them only a single weapon, and turning them loose into the woods. If they can survive and avoid capture until the following morning, Scribner will let them live.

AFter the dinner, Scribner kidnaps Brinke and ties her to a wall in the dungeon wearing only her bedtime lingerie (which is quite attactive). I have to give credit to Brinke for this scene – it looks like she is actually TIED to the wall with her hands abover her head. Many times the actresses will cop out and have loose-fitting handcuffs. After a short dialogue, Scribner rips off Brinke’s top (just a brief scene) and begins to kiss her as the camera fades to black. Next we see the brother, Kaitan, and Beal plotting their escape from the planet. The brother and Kaitan scale down a wall and go into the woods to set traps to capture Scribner on his next hunt. Meanwhile, Beal is tasked with keeping Scribner from discovering that they’ve gone.

The next scene is Brinke, nude, on a table, held down by one of the mechanical robots, while Scribner stands over her. Scribner probably got an eyeful, but since its a profile shot we just see a bare hip, a bare breast, and a lot of squirming (which is very well done). Brinke has a great body – too bad we didn’t see more of it.

There’s a soft-porn scene a bit later when Kaitan throws the brother into the bed to “play act like we’re having sex” to explain why the brother isn’t in his bed when a robot enters the room. A good scene, played for laughs at the end.

Fast forward a bit – the brother is kidnapped, sent on a hunt, killed, and the girls are then kidnapped. We get treated to a scene with Kaitan, Beal, and now Brinke all wearing leather bikinis and chained to a pillar in the dungeon. I wish a) that the camera hadn’t cut between Scribner and the girls so much and b) that the girls had been nude. After all, if Scribner had just had his way with Brinke, why would he want to go to the trouble to dress her? Still, of the three girls, Brinke does the most squirming (and quite a good job of it too).

In the end, the girls are released into the jungle. Brinke gets killed (unfortunately) but the other two managed to bump off Scribner. Overall, for a low budget “B” movie the acting is not half bad, the girls are all lovely, the special effects are adequate, and the plot is good. Worth a look. It made me a Brinke Stevens fan. If only she would team with Lana Clarkson and do a “Barbarian Queen III” film, I’d be in “B” movie heaven.