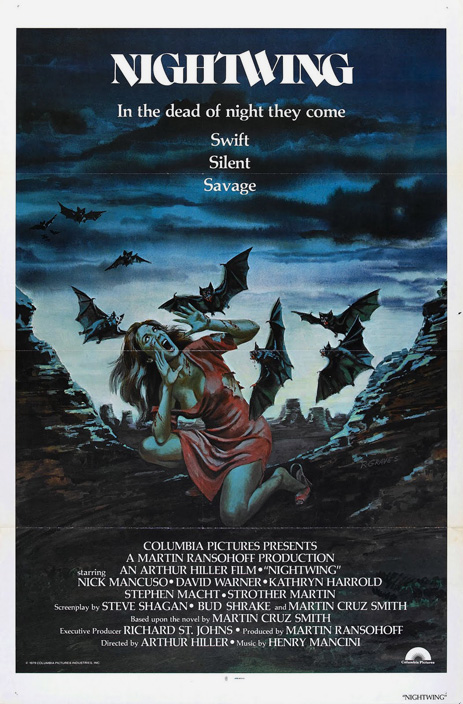 This adaptation of the Martin Cruz Smith novel (scripted by Steve Shagan, Bud Shrake, and Smith himself) is actually pretty faithful to the source material. Ultimately, it’s not quite as satisfying as Smiths’ story, where the characters were given more depth. But it’s still a striking and interesting (if not great) film, an unusual mix of animal horror, human drama, and Indian mysticism. The actors in all of the major roles are pretty good, and director Arthur Hiller – a man known more for mainstream comedies and dramas such as “Love Story” – does his best working within a different genre. It’s true that the film doesn’t have very much suspense, but the animal attacks are NOT that badly done, despite the presence of some chintzy effects. At the very least, what “Nightwing” has to recommend it is beautiful New Mexico scenery and a solid score by Henry Mancini.

Nick Mancuso stars as Maskai policeman Youngman Duran, faced with sudden and mysterious deaths of animals and humans alike. An Englishman named Phillip Payne (David Warner) knows the score: the culprits are vampire bats, and he’s the man to take care of the problem. Apparently eradicating this species is his life’s work (one would think that animal rights activists would take exception to such a pursuit), because he believes that they embody evil. Yeah, I know, pretty thin for a motivation. Making life difficult for Duran is local mover and shaker Walker Chee (Stephen Macht), a man who’s made it *his* mission to acclimate himself to the white man’s world, and who’s giving an assist to a mining company.

Overall, this isn’t bad, even if lacking in style. It’s fundamentally a decent story that’s capably told. Mancuso is engaging in the lead, and Warner delivers his lines with total conviction, no matter how silly his character may be; the film benefits from his presence. The lovely Kathryn Harrold is appealing as Youngman’s white love interest Anne Dillon, George Clutesi (who was in another Indian themed horror film from the same year, “Prophecy”) is memorable in the small part of old priest Abner, and the great Strother Martin, in one of his final film roles, is a joy to watch as always as the bigoted trading post operator Selwyn. Among the supporting cast are character players Ben Piazza, Donald Hotton, Charles Hallahan, Alice Hirson, and Pat Corley.