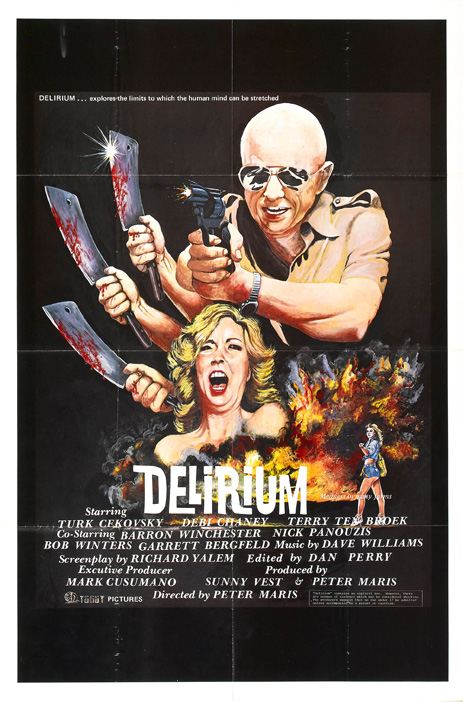 At the end of the day, movie producers are just people with an eye for business. There is very little that separates a great producer from a great sales manager. Both are looking to make money and both will examine the market to see the best way of exploiting their ambitions to a profitable return. The surprising success of Halloween and Friday the 13th meant that market researchers were quick to realise that cinema audiences had an urge to see psychopathic killers. There were many slashers released from 1980 to 1985 and the reason that the quality of most of them was so poor is because market trends change quickly and production teams had to move rapidly, which eliminated the chance of a decent pre and post-production.

Delirium or Psycho Puppet as it’s known in Europe reminds me of the movies from Hong-Kong based martial arts hack Godfrey Ho. Ho was famous for his ‘cut and paste’ technique, which saw him take half-finished oriental films and paste in western actors sporting hilariously outlandish ninja suits for scenes that rarely, if ever, connected with the cohesiveness of the plot. He would then release the movies worldwide with titles such as Ninja Terminator, Zombie vs. Ninja or Ninja Dragon and despite the fact that they had two plots running simultaneously that rarely interlinked with one another, the global interest in Ninjitsu meant that they often made a considerable profit.

Although Delirium is not a combination of two different movies, it looks almost as if the director threw in a maniac killer just for the sake of having a maniac killer in his feature. This is not an out and out slasher film, but it does at least incorporate many of the clichés that were popular following the success of Halloween.

The opening scene sees two unidentified guys in suits throw a corpse into the Mississippi River. They get back into their car and speed off into the night. Next up we cut to a seventies disco bunny returning back to her apartment late in the evening. On entering her accommodation, she is shocked to discover her flatmate’s corpse nailed to the door. We soon learn that the girl was the first victim of Charlie, a demented Vietnam vet that has gone completely insane and is travelling across the country murdering anyone that gets in his way. The Police are baffled as to who could be behind the killings, but soon we learn that Charlie is just a cog in a complex wheel of murder, blind-justice and mayhem…

Friday the 13th is often credited as the first slasher movie to incorporate bloody special-effects into its killings and it started a trend that would see entries blowing huge portions of their budgets on gratuitous gore. Well Delirium pre-dated the camp Crystal Lake murders by at least a year and therefore was the first psycho killer movie post-Halloween to exploit the graphic nature of its murders. Make no mistake about it; Delirium is a bizarre beast of a movie and it was one of the first additions to the video nasty list in the United Kingdom.

The film doesn’t seem to know where to hang its hat and attempts to mix parts from numerous cinematic styles. It plays like a crossbreed between a splatter film and a cop flick, but never appears content to align itself to any one genre. It’s an oddity of a feature for sure, which references everything from Vietnam flicks to cop thrillers that were popular during the seventies. The flagrant amateurism of its production prevents the movie from being a total success, but the plot just about manages to keep you watching to the finish. Admittedly, the filmmaker’s decision to kill the psycho slasher on the hour-mark was a poor one and it subtracted the best part of the story. But there’s just about enough interest in the rest of the story to keep you watching and it manages to refrain from becoming tedious.

Technically Delirium is barely mediocre and the various Vietnam flashback sequences are visibly poor and look like they were filmed in a local park as apposed to a battlefield. The main problem with the feature is that it reveals the crux of its synopsis far too early, which is a shame, because the plot is fairly ambitious and it feels almost as if a decent puzzle could have been created. It plays like a mass of ideas that lack the shine to link together and create a decent movie experience and an uninspired script and average performances certainly didn’t help. It’s also worth noting that Delirium has a theme tune remarkably similar to that from the British quiz Mastermind. It’s fairly amusing for those that recognise the common theme from British television and it’s certainly a bizarre decision from the production team to incorporate it into their feature.

It’s quite gory in places and it’s staggeringly misogynistic. Women are slaughtered it seems just for being women, and there’s a certain gruesomeness in the randomness of the killer’s victims. Despite the lack of any credible suspense, Charlie does manage to come across as quite a convincingly nasty psychopath and his lack of any genuine motive adds to his fear-factor.

Delirium is by no means a great or even good movie, but it’s a fairly strange effort that interests mainly because it’s genuinely obscure. It can’t help but feel amateur, almost if it was a student project, but in a way that adds to its charm. If there’s absolutely nothing else left in the video-shop, then give it a go. However be warned, you need to be extra forgiving.