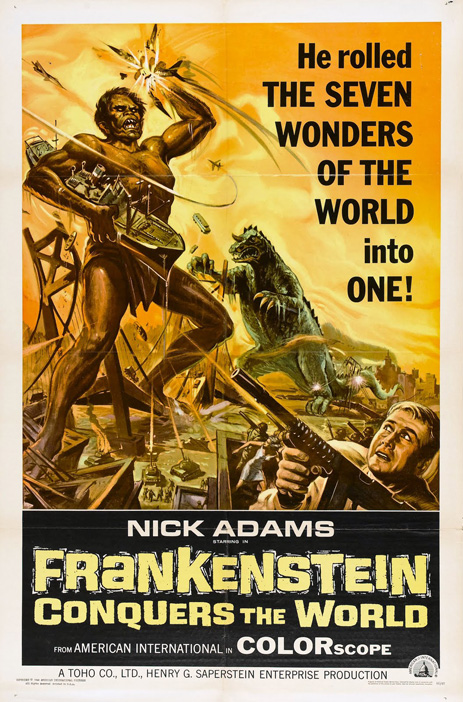 Frankenstein vs Baragon is one of the most under rated of the Toho Series. It is a highly entertaining film and one of only two Toho Films to star actor Nick Adams. Adams adds something special to the Toho Films he is in. Maybe because he is an American Actor who does not need his lines to be voiced over when the Japanese movies he is in are transferred over to English.

Basically the story goes that part of the Frankenstein Monster is taken over seas during a war and spawns into a giant monster. Basically this monster does not do anything wrong, he is just out of place. But he is blamed for many different incidents that are not his doing but actually the doing of the burrowing dinosaur Baragon.

For the most part I like this movie because Baragon is my favorite monster/kaiju. Baragon is what makes this film, not Frankenstein. Baragon looks awesome, has great abilities,(breathing fire, burrowing, jumps far) and has a great roar. THe Frankenstein monster just looks like a guy who has big teeth, bad hair, and walks around in a caveman outfit.

Baragon gets to have his only starring role in a movie, and I know I am being biased but I think that it is one of the best villain roles for a Toho Monster ever. THis is mainly because he is so secretive by burrowing underground and is undetected. Baragon gets in a lot of solid action towards the final half an hour. The fact that Baragon is responsible for the destruction that Frankenstein is blamed for is very similar to some parts of the original Frankenstein book by Mary Shelley. Strangely enough Baragon is not referred to by his name in this film.