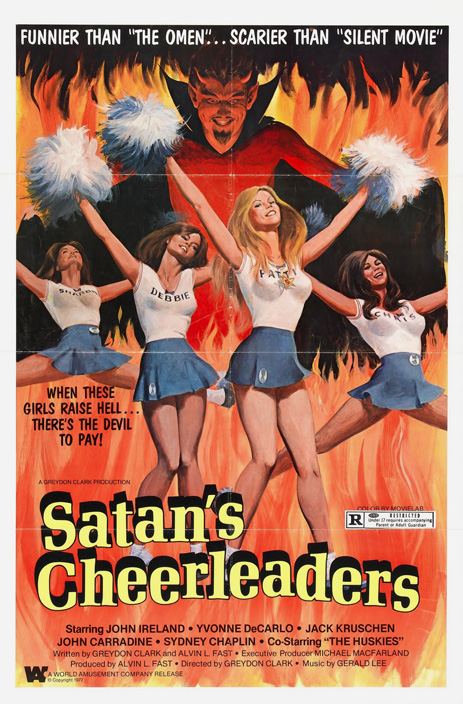 A group of buxom, nubile, well-curved cheerleaders are off to a competing town to cheer at a rival football game, but when the vehicle driven by the charmingly naive Ms. Johnson breaks down along the way, Billy the janitor picks them up, but with his own personal agenda for some comeuppance in retaliation for their persistent teasing. Seems he made his own little deal with The Devil to possess ‘Patti’ – but little did he know that she is actually the “chosen one”, which is the only reason there was an issue. Unfortunately, despite his desperation, he is struck down for his trouble at the very Tabernacle of Satan.

Satan here is represented as a mighty fearsome Lion* totenkopf upon a pillar overlooking a stone slab, while the cultists wear The Pentacle of The Evil Eye, as well as prominently demonstrated in Emma’s private Ritual Chamber. Turns out Sheriff “B.L. Bubb” was merely pretending as presiding High Priest, which earns him an impalement by the apparently resurrected zombie janitor.

The red-robed Officiant leading the black robed congregants through the wilderness is reminiscent of The Devil’s Rain, while one of them was being tolerated in the group being a hellariously salacious former monk with a persistent bad habit of gesticulating the signum crucis, and is seemingly preoccupied with “guarding” the maidens, which the appropriately ferocious dobermans ‘Lucifer’ and ‘Diablo’ do quite well.

They manage to escape both the house and the barn by the resourcefulness of Patti, “the smart one”. The only town dweller not involved with the Cult is the local hobo played by John Carradine, considered too insane to be included, yet amidst brief instances of clarity, does seem to realize the goings-on, then quickly lapsing into another mad episode.

It’s Evil vs. Evil to witness with devilish delight, DeCarlo {Lily Munster} at The Altar of Satan uttering the Words of Power “Audi Precas Meas, Satana. Blessed Be!”** while attempting to kill Patti. She seems to be the only one that realizes the girl is a dangerous element and does what she can to avert The Devil’s wrath. Her words echo across the Ether in diabolical magnificence.

The cultists consider it fortunate happenstance that the girls are in town, and would make for ideal sacrifices for The Black Mass of ancient times, while a virginal maiden is selected for The Prince of Darkness Himse