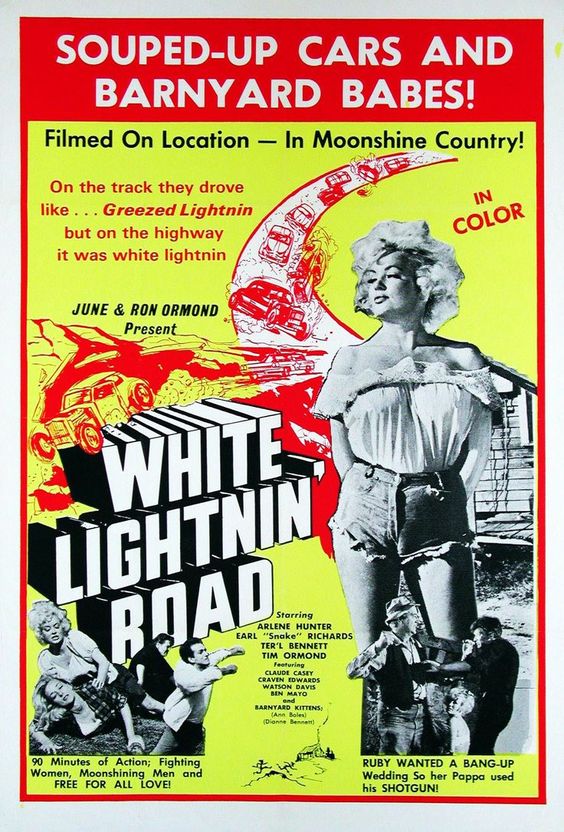 With WHITE LIGHTNIN’ ROAD, writer-director-producer-photographer-editor-actor Ron Ormond created the ultimate low-budget, 1960’s Southern drive-in car racing film. Ormond’s mid-60s output is quite impressive (see my reviews of GIRL FROM TOBACCO ROW, FORTY ACRE FEUD, and PLEASE DON’T TOUCH ME), working in genres much beloved by Southern and rural audiences and giving them products that mirrored their tastes and environment. Ormond’s work is well-remembered by people who saw the films way back when (I saw some of them), but not too well known today as other exploitation filmmakers from the same period, which is ironic since WHITE LIGHTNIN’ ROAD and the three films mentioned above are all still not hard to find on inexpensive and good quality VHS tapes as of this writing. This film is rooted in car racing, with a moonshine subplot thrown in in honor of THUNDER ROAD, although the viewer also gets a crime subplot (with Ron Ormond himself as “Slick,” the gangster running a crooked auto parts syndicate!), a shotgun wedding,and a cat-fight between the two main female characters. Earl “Snake” Richards once again stars (he was in GIRL FROM TOBACCO ROW) and he is as perfect of a Southern drive-in film hero as Earl Owensby or Joe Don Baker. Richards, also known as Earl Sinks, was vocalist with the Crickets in the period after their break with Buddy Holly (this happening while Holly was still alive, after BH went to New York, and the Crickets decided to stay in Lubbock and work in Clovis) and sang lead on the original version of “I Fought The Law.” In the post-Crickets period he moved more toward country, and made many fine country records. He also had a lot of success as a country songwriter, and continued in the publishing world for decades. He had a brief period in films, but he made his mark–he was really an extension of the late-50s, Elvis-inspired leading men found in drive-in films, with the slicked-back hair, curled lip, and tough-guy attitude. Here he is NOT the hero, but ironically he is far more attractive than the hero, Joe, who is a bit bland and who has a strange accent in the film’s early scenes (I know there are places in Louisiana and Virginia with odd accents, but I wonder if the actor playing Joe is actually a Southerner, or if he’s just self-conscious and screwing up his line readings because he is nervous). Tim Ormond has perhaps his best role in an Ormond family film as the young boy who hangs around the racetrack and befriends Joe (and even helps him in his fights against Snake!). Tim Ormond provides a viewpoint character for the children in the audience (as he did in GIRL FROM TOBACCO ROW)–and he also gets the last shot in the film (no doubt a present from his parents, the filmmakers!). Legendary model Arlene Hunter appears as Ruby, the love interest who is desired by Snake but who wants Joe for herself, Joe of course not being interested in her. She eventually marries Snake in the shotgun wedding mentioned earlier. The rural photography is beautiful with lots of striking color, and the racing is well-photographed. Ormond actually staged his own races so there is not the usual five people depicted in a reaction shot looking at a race that is stock footage. The musical score is a grab bag–evidently using all kinds of library music available to him, we hear the old flamenco guitar from JAIL BAIT (which Ormond used in other films too) for ten seconds or so, the amplified harmonica music from the Mulcays used in other Ormond films, music that sounds like it could have come from old Lash LaRue films from 1949 produced by Ormond, and various canned music that could be used in circuses or bank commercials! There’s no consistency to the nature of the music, although the music does drive the action and is well-suited to most scenes. It’s interesting that Ormond DID NOT use any country music in this film. This film should have a large audience. I would think that any network than runs NASCAR or Dukes of Hazzard re-runs could show this film and have it do well–virtually everyone in today’s audience would not have seen it! All of the Ormond family’s 1960s films (I haven’t yet mentioned THE EXOTIC ONES aka The Monster and The Stripper, which has a dedicated cult following and was released in 1968) hold up very well today and are very entertaining. Someone should look into re-mastering the whole lot of them for DVD and getting them into wide circulation. Tim Ormond is still around today (June Carr Ormond is still alive as of this writing, but she is getting up there in age!), so perhaps he could provide commentaries and extra material. WHITE LIGHTNIN’ ROAD is a wonderful time capsule that takes us back to the Golden Age of rural drive-in cinema. If you lean toward that form of entertainment, you should find a copy of this immediately and show it to your friends. Bravo to the Ormond Organization! They totally achieved what they set out to do…and how many people in ANY line of work can claim that???