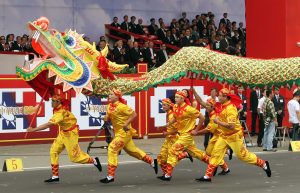 We have been more than aware of the fact that Hollywood longs for complete and total access to the Chinese market, and it is also well known that the Chinese aspire to acquire a large part of the US Movie Theatres. The Chinese market in a much different animal that we have here in

North America, it may be important to note that while US Studio want a piece of the Chinese box office, Chinese penetration may have more to do with a real estate play. Whatever the end game is , one that that is becoming more apparent is that it will not end well for Hollywood.

In China property and leisure industry giant Dalian Wanda, and Internet giants Baidu ,Alibaba and Tencent are all racing to change the way the country’s film industry operates. Their business models are totally innovative and do not look like their Western counter-part at all.. Instead, they are the total vertically integration of all the components along the movie life cycle. They are committed to total dominance either through organic growth, acquisition or strategic alliance.

As China becomes more individualistic and consumer-oriented, these juggernaut companies, which have the ability to connect the different segments of the local market, become an increasingly attractive partner to American studios looking to get their content in front of as many global eyeballs as possible. Wanda, Baidu, Alibaba and Tencent’s assets are vast and powerful, giving them the ability to attract audiences across every major media platform. Wanda owns the largest cinema chain in China; Tencent boasts nearly 800 million social media subscribers, and is the largest online games distributor on the planet; Baidu is China’s leading search engine; and Alibaba is the world’s biggest e-commerce business.

For Hollywood and movie culture in general, the crush that the studios have on the Chinese market could will be a fatal one. They may find themselves the victims of a pincer business maneuver. In classic military terms a full pincer movement leads to the attacking army facing the enemy in front, on both flanks, and in the rear. If attacking pincers link up in the enemy’s rear, the enemy is encircled. Such battles often end in surrender or destruction of the enemy force, but the encircled force can try to break out. They can attack the encirclement from the inside to escape, or a friendly external force can attack from the outside to open an escape route. My feeling is that there would be no escape for Hollywood.

Despite having the second largest number of movie screens in the world, with well over 12,000 in 2011 , China remains one of the world’s most under-screened major territories in terms of movie screens per capita. In 2015 and 2016, this is rapidly changing. Whereas the United States has one screen for about every 7,800 people, China only had one for every 112,000. There are numerous cities in China of 500,000 and even 1 million people that have no modern movie screens. For China to be on par with the U.S. on a per capita basis, it would have to open 160,000 more screens. Despite an economic slowdown in the country this year, the meteoric growth of China’s film industry has been fueled by an expanding middle class and breakneck expansion of cinema infrastructure. A total of 8,035 screens were installed in China in 2014 a rate of 22 screens erected every day. China’s screen count now sits at 31,627, North America’s is estimated around 39,000.

China’s multiplexes were built in the past five years and because of that its cinema infrastructure is highly modern and technologically advanced, more than 10,000 have digital projection and about 7,000 are equipped for 3D. There are about 3,300 theater locations operated by 45 commercial cinema chains in China, about 2,200 of which can report box office daily.

In total, in the first six months of 2012, 1286 theaters each managed to exceed ticket sales of more than 1 million RMB (about US $160,000) at the box office. And about 100 theaters sold over 1 million dollars box office in the first half of the year.

Here is where the rub comes in to play. Imported films like the Avengers would be entitled to revenue sharing would receive from 13% to about 17.5% of the total box office receipts of their films,(*which theatre owner would not mind paying 17.5%box office share, depending on how much the movie actually made. With the new agreement between the studios and the Chinese government agencies, revenue sharing films now receive a straight 25 percent of all box office receipts. Dazzled by the sheer numbers of the Chinese demographic, Hollywood studios ignore the fact that local Chinese producers receive 43% of the gross.

A wide release in China represents 2200 screens. Television advertising is too expensive or not allowed, print is too diverse and the Chinese population receive most of its movie information from the internet. The Hollywood studios pay the marketing and advertising costs for their films that are released in Chinese theatres, Two years ago, many trailers for both Hollywood and local movies could be seen before a movie but now Hollywood trailers have disappeared in most China theatres. What happened? Hollywood trailers were replaced by ads for cars, real estate, shopping, and local films. Hollywood studios have weak control on distributing their films in China despite the fact that they pay for the majority of the advertising. Some film that this practice has a strategic intent.

Okay here lies the trap. The Chinese have used American produced product with the false promise to expand access to their market, while using American inertia to create bigger markets for its home grown business. You cannot really blame them., the pixie of the MPAA , Jack Valenti was notorious for using such a strategy in overseas markets.

By the end of 2017, China is expected to surpass North America , which had a record $11 billion in box-office revenue in 2015, as the largest global movie market

China’s industry regulators maintained their long-running campaign to boost the performance of local movies, while limiting Hollywood’s access to the market, including extended black-out periods for foreign titles. Three Hollywood movies Furious 7, Avengers: Age of Ultron and Jurassic World landed in the top 10 at the Chinese box office in 2015, compared to five last year.

Hollywood has tried dancing with the dragon, and has only managed to get it’s toes stepped on and discovered that their date has stolen their wallet.

It is time for Hollywood to retreat and re-focus on revitalizing the North American market, a market which one of the major players, serves a Chinese master.