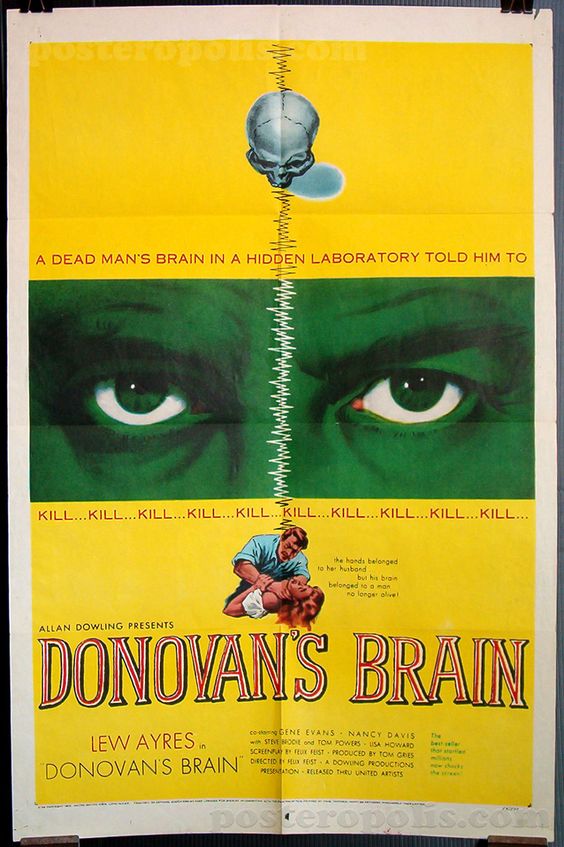 Donovan’s Brain is one of the better known and highly respected science fiction films of the fifties, and it’s plain to see why. The scant special-effects requirements, serious tone, high-profile cast, and human-interest driven plot would have put it in good position to cross over and appeal to a more mainstream audience than the typical, lurid invasion or radioactive-monster flicks of the day. But can it satisfy the needs of the modern fan of black and white SF? Let’s take a closer look.

The story centers on Dr. Patrick Cory (Lew Ayres of “Dr. Kildare” fame) and his experiments in preserving brain tissue. His goal is to keep an entire brain alive in a tank, so that he can study it and learn its secrets for the betterment of all mankind. He is assisted by his wife, Janice (Nancy Davis of, well, being-married-to-Ronald-Reagan fame), and Dr. Frank Schratt, who provides the surgical expertise despite his near-constant drunken binges. While Dr. Cory has begun to have success with keeping monkey brains alive, his big break arrives when the dying millionaire W.H. Donovan is delivered to his lab for emergency treatment after a plane crash. So, when Donovan dies on the operating table, Cory thinks nothing of swiping his brain.

While Donovan’s brain thrives in its tank of nutrient solution, Cory becomes frustrated at his inability to determine what a disembodied brain might be thinking about just by looking at it and measuring its brain waves. So, to Janice and Frank’s dismay, he pins his hopes on a theory of establishing telepathic contact with the brain. Unfortunately, Donovan is way ahead of him on this, and uses the opportunity to take over Cory’s mind and force him to take steps to gain control of the Donovan fortune and use it to ensure the brain’s continued survival.

Donovan may have been a ruthless, brilliant financier, he proves not to be very good at covering his tracks, and Cory soon has the Treasury Department, an unscrupulous journalist, Donovan’s heirs, and an increasingly worried Frank and Janice dogging his steps. Curiously, though, despite the fact that Frank and Janice go from being concerned about Cory’s sanity to believing that Donovan has taken over Cory’s mind, and while they discuss pulling the plug on the brain several times in the course of the film, each time they decide that it would be better to let Dr. Cory or God decide when the “experiment” should end.

Once they’ve finally had enough of Donovan, they hatch a plan whereby Janice will distract Cory/Donovan while Frank puts a bullet in the brain’s, er, brain. Donovan trips to the plan in time to stop Frank, mainly because Janice’s idea of distraction is to tell Donovan that they intend to put an end to his influence over Cory. So, God finally steps in Himself and pulls the plug on the brain with a well-placed lightning bolt. Apparently, God got an assist in this via taped instructions from Cory (recorded in one of his lucid, Donovan-free periods) to monkey with the house’s lightning rod, but this explanation feels kind of tacked-on to avoid a completely Deus Ex Machina ending.

In the end, Dr. Cory is back to his old self, and is off to defend his experiment to the legal and medical authorities, which, excuse me? I’m sorry, Dr. Cory, but not only did you hijack a brain at the drop of a hat, but people died as a result of your actions, which I think puts the nails in the coffin of any medical-ethics defense. You’ll be luckier than you deserve if you don’t end up serving jail time for bank fraud, extortion, and manslaughter.

So, what have we got? Well, apart from the nonsense of Dr. Cory’s hope for redemption in the denouement, we’ve got a very tight little story, an excellent cast, decent production values, and a fine director in Felix Feist. But it all comes across as a little dry and underwhelming. After all, if you’re a fan of old SF films, it’s probably because you like rubber monster suits, cheesy effects, and whacked-out scripts. Still, it is a classic, and as such is worth a look. But you might want to have a copy of something like The Brain that Wouldn’t Die on hand in case you end up feeling a bit deprived in the cheap-thrills department.