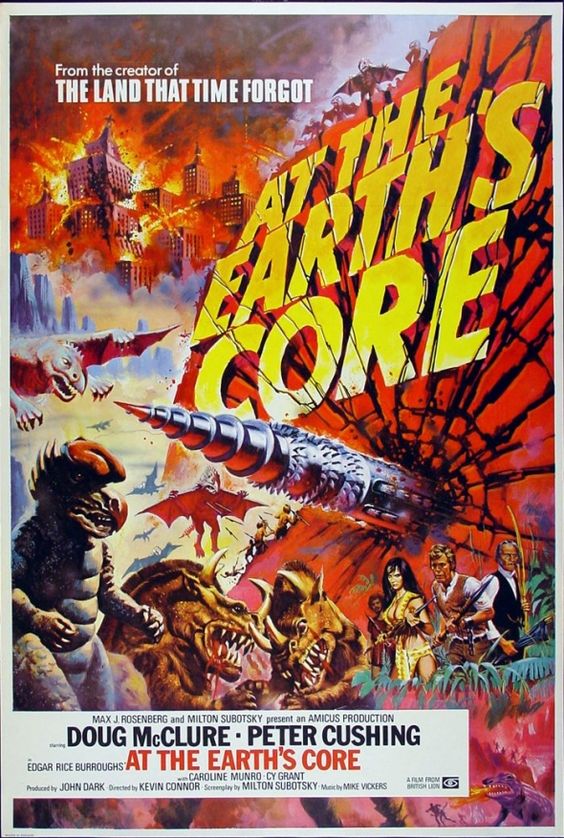 Of all the E.R.Burroughs screen adaptations that Doug McClure starred in the 70s, this is the stagiest of all. It’s so stagy, you can taste the dust of the sets and feel the heath of the lamps above. The thing looks like a very, very big budget school play, or indeed, a very very low budget action movie, which it actually is. It’s been said on many occasions that this was the last of the genre entries, and I do hope it was. The genre didn’t die peacefully, but in horrible agony, amidst a lot of smoke, fake blood and lousy sound effects. Peter Cushing must have felt a boy again, as a nutty professor whose shirt stays white as snow after the gentlemen has dragged himself through the slimy crap-holes of the Underworld. What a sport he was, to accept a part in this mishmash and carry it so bravely.

Shot entirely on a sound stage and accompanied by then trendy, now unbearable synthesizer soundtrack, the main anti-attraction of this film are the cardboard monsters. Yes, there are always monsters like that in a Burroughs adaptation, but they rarely manage to be so completely ridiculous, helpless or void of any credibility. On a few occasions, during the elevated action-combat scenes where Mr McClure heroically attacks the creatures, you can almost hear the empty, hollow sound as his head bangs against the side of a triplodactocryptosaurus. Fortunately, the animals explode and go up in flames the minute they trip and fell over. Indeed, there is a great deal of unmotivated exploding as the film (and the genre) draws towards the finale. And lovely Miss Munroe loses her underworldly accent.

The triple bill, currently on the market, features this film plus two others – The Land That Time Forgot and The War Lords Of Atlantis. The first two are quite strong entries, especially the first one, with a lot of money invested and occasionally even fascinating script turns. Don’t expect any of these qualities from this film. Get drunk with pals and laugh shamelessly at what you see. After all, the makers didn’t have any shame either.