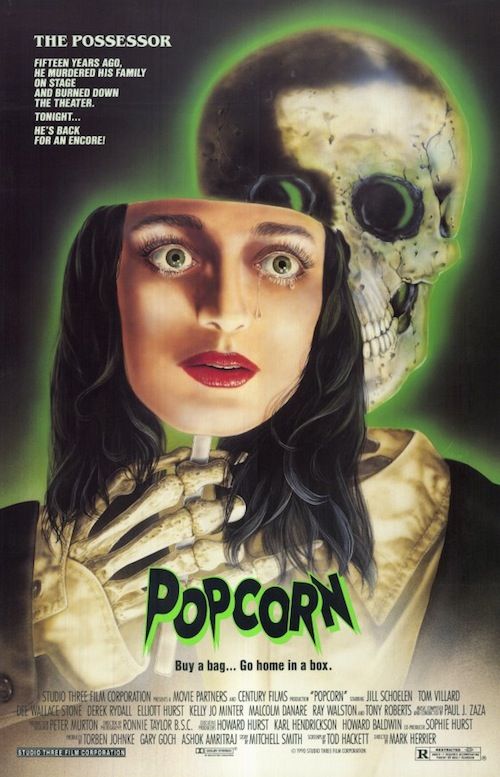 Maggie, a film student at University, continuously wakes up with one bad dream after another involving some bearded wacko, which she records about on a tape, so to come up with some sort of screenplay. Her film teacher and fellow peers have organised a all-night film festival at an old theatre, which will be featuring old b-horror movies with the use of interactive gimmicks in the hope of raising enough money to support the film department, after the university cut their funds. While setting everything up, they stumble across an old film known as “The Possessor” and learn from their teacher about its macabre past. This startles Maggie, as the images in the film are the same ones in her dreams. When the fun starts, Maggie is sure that the supposedly dead star/director Lanyard Gates of that film is wandering the theatre.

Bad dreams might appear early on, but Mark Herrier / Alan Ormsby’s contributions are a far more pleasant experience in this fashionably inspired parody of gimmicky (think of William Castle) 50’s b-grade horror films interwoven into a silly slasher formula of a film-within-a-film. Since it knows what it is, it plays itself accordingly to the budget and material.

The enthusiastic concept is freshly staged with plenty of neatly devised novelties, vividly fruitful backdrop and a preposterously far-fetched screenplay streaming with admirable imagination, fruitiness and ingenious twists. However most of the oddball fun is derived from the stylishly correct mocking of the “horrorthon” b-films; “Mosquito”, “Attack of the Amazing Electrified Man” and “The Stench” and their cinema gimmicks (like the 3-D flying mosquito in “Project-O-Vision”, “Shock-O-Scope.” in the audience seats and releasing bad odours in “Aroma-rama” for the proper experience), which is being screened to the boisterous audience with their smart remarks and in-spirit costumes. Ormsby was the mastermind behind this enjoyably down-pat features with their natural fondness to the era, which I believe outdid the slasher element of the picture.

Now that side of the fragmented story starts off strong, compelling and eerie, but it crashes towards the back-end with contrived, illogical and overblown developments working there way in. But hey that’s part of the parcel and makes this festivity wildly fun. It’s kind of like a melding together of “The Abominable Dr. Phibes” and “The Phantom of the Opera” with severely likable 80’s camp. There are only few deaths, but they’re done with enough macabre creativity to cover-up the lack of blood and the spongy script delivers on the wit and overall weirdness. Although some on going gags turn out to be less funny.

Herrier’s panache direction is on cue for most part with snappy pacing, atmospheric lighting and the right sense of mood when drilling those moments of tension with the lurking quirkiness. He makes great use of the flamboyant scenery and vintage theatre settings. Expressive make-up / special effects are strikingly crafted to achieve the right effect and the killer looks menacing with there ingenious hobby involving faces. Ronnie Taylor’s understated, polished cinematography works the floor well and Paul J. Zaza’s tingly spooky music score suit’s the film’s light-hearted air. Also the bouncy soundtrack has that reggae/pop touch to it.

Largely shaping up is a likable cast with agreeable performances. The always sweet Jill Schoelen is typically fine in a valiantly airy turn as Maggie and Derek Rydall measures up as the heroine who can’t take a break Mark. But it’s the support roles where the most interest arises with the likes of Tom Villard’s superb performance as an obsessively nutty film student, Tony Roberts’ amusing turn as the film teacher, Dee Wallace Stone plays it sincerely as Maggie’s mother and Ray Walston’s avidly effortless cameo as the gimmick man.

This winsome little low-budget item is a rather solid cheesy comedy/horror/parody effort even with so many uneven distractions inbound. Don’t wait around, get your tickets now if this sounds like your kind of entertainment