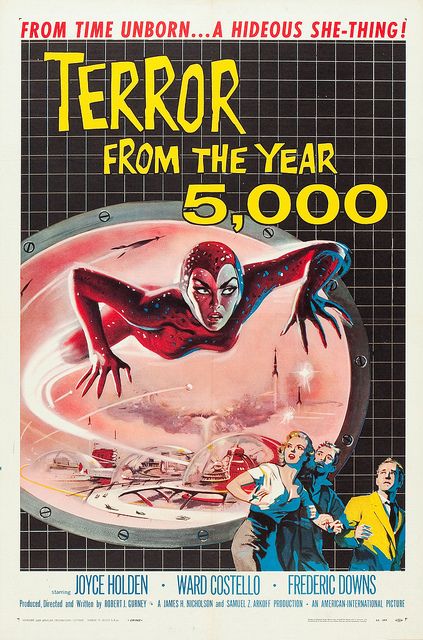 On a lonely island in Florida’s Everglades, a professor is experimenting with time travel. The project is successful to the extent that Prof Erling and his assistant Victor are able to trade artefacts with people from the year 5,200AD. One of these items finds its way to the desk of Dr. Bob Hodges, a museum curator and all-round good guy, who is amazed to learn that the figurine dates from the future.

Bob Hodges heads for the Everglades, where Prof Erling and his beautiful daughter Claire make him welcome. Victor, meanwhile, has started putting in some unauthorised overtime in the lab, with alarming results…

Robert Gurney wrote, produced and directed this gauche piece of malarkey with its wooden acting, daffy plot and laughable sets. The scientific gadgetry in the lab is particularly amusing.

The howlers come thick and fast. Bob explains to his secretary Miss Blake (boy, if there were only an oscar for stodgy delivery …) that carbon-14 dating places the statuette in the future. Just how carbon-14 can do that is baffling to ordinary mortals like me! When Bob fires his shotgun, we hear the shot but there is no muzzle flash from the dummy weapon. When a female in a nurse’s uniform opens the door, somebody says, “You must be the nurse”. The clock on the lab wall shows silly times which don’t match the sunlight outside. The prof’s gadget disrupts all machinery in the district when it’s switched on. We see a TV set in a local bar pack up, but nobody seems to mind.

There are many unintentional laughs (“I’ll do my exploring in the laboratory, if you don’t mind”, “And then the missile centre fired him” etc etc). Every plot point is laboured to death. The non-sequiturs abound. Nobody flinches when it is realised that they are all contaminated with radioactivity, and no-one warns Claire when she walks in. Later, it turns out that the lab has protective suits available. When Victor breaks a pane of glass in the time chamber, he picks up a replacement pane of exactly the right size which happens to be lying beside him. When Bob gets out of bed and follows Victor, he unaccountably has his shoes on. Why would Victor go to the trouble of getting in bed in the same room as Bob, only to sneak out and tamper with the gadget? And why at this stage would Bob want to follow him?

It goes on. The ‘monster’ speaks perfect Greek and English, even though it comes from five millennia in the future. The men know there’s a dangerous creature out there, but they stand back and let Claire answer the door. The monster kills Angelo easily, but Claire is able to unmask it without any trouble. When they find the nurse’s body, Hedges and Erling stroll back to the house as if they were picking mushrooms. Nobody calls the police when Angelo is found dead. Bob and the Professor abandon the house, with its two women and sick man, to go searching the island together. Nobody thinks of calling for help. The nurse, in her immaculate uniform, has to walk up to the house through swamp and jungle without a guide. When the alarm is sounded, nobody wonders where Victor is until after it’s all over.