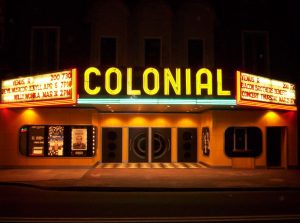 It is a warm Indian Summer Saturday night in Franklin Indiana. The Cicadas has finally stop their evening symphonies and have retreated back into the ground. The temperature hovers in the low eighties, and the residents of this blessed town talk about the cold front which will signal the end of their summer. The sidewalk in front The Historic Artcraft Theatre hosts a throng of people waiting to buy tickets to the third screening this weekend of the movie HOOSIERS. Many will be disappointed as all 623 seats will be spoken for.

It is the 30th anniversary of this rare tale from the heartland, and for Indiana audiences it rings true. The film is a fictionalized re-telling of the 1954 Cinderella story of the Milan Basketball team, a small town who went on to win the State Basketball Championship. This is Indiana’s movie, pure and simple. The good people who run the Artcraft know this and give the audience what they want. In three month’s time they will provide Indiana audiences more of what they want when they sell out seven shows of the Indiana set Holiday classic “A CHRISTMAS STORY”.

One of the key elements in re-igniting the flame of movie going is to provide that one thing that I think the major’s can never compete in and that is promoting and celebrating COMMUNITY. It is something that in my travels I see the Historic Artcraft Theatre doing better than anywhere else in North America.

The clients of the Historic Artcraft Theatre are not swayed with overstuffed luxury seating, the ability to buy over priced concessions….they come because the management of this theatre understood one thing ….in order to succeed it must first actively practice community engagement. Community Engagement is the process of building relationships with community members who will work side-by-side with you and your theatre as an ongoing partner, in any and every way imaginable, building an army of support for your mission and your theatre, with the end goal of making the community a better place to live.

This is not relying on social media, this is not placing ads in newspapers……this is telling the story of why a movie theatre is good for and will help you grow your community. Community engagement is the purest form of grassroots marketing. One sign of a healthy community is its simultaneous ability to preserve and invent its culture that is, to conserve its history and heritage while developing new expressions for current times. The Artcraft has combined a love of the past and have coupled it with a need for community expression and has designed a schedule to celebrate both the past and the future.

Unfortunately the concept of community theatre preservation has been interpreted largely as meaning stagnation when, in fact, restoring and or promoting your local movie theatre can be the basis for innovation and advancement. I have seen many small communities start to use their local theatre in a re-branding and re-imagining of their downtown core,

As the Artcraft has shown, heritage and history are frequently essential sources of meaning that give a place character and resonance. Buzzwords like “creative economy,” “creative class,” and “cultural economy” are becoming more common among urban planners, arts administrators, economic developers, and business and municipal leaders. A natural fit would be to use local independent theatres as economic engines for the revitalization of many often ignored downtown cores across America. Whatever label is used, this use of terminology linking culture and the economy indicates recognition of the connections among the fields of planning, economic development, and arts and culture. The best expression of this is a revitalized small town theatre.

The Historic Artcraft Theatre has shown a direct link between local economies and the revitalization of the movie going culture in your town, Having a community engaged movie theatres does the following:

improves a community’s competitive edge;
creates a foundation for defining a sense of place;
attracts new and visiting populations;
helps define the visions of community and business leaders; and
contributes to the development of a skilled workforce.

This newsletter goes out weekly to about 4000 professionals in the business of motion picture exhibition. My hope is that a couple of you will take the time to look at the example of The Historic Artcraft Theatre http://www.historicartcrafttheatre.org/ and see something that would in the community you serve provide benefit.

As I write this six hundred plus souls are watching the movie HOOSIERS. They are laughing together, sighing together and with every admission bought and bucket of popcorn consumed the community of Franklin grows stronger.

In the end the best use of a local independent movie theatres is to manufacture community.