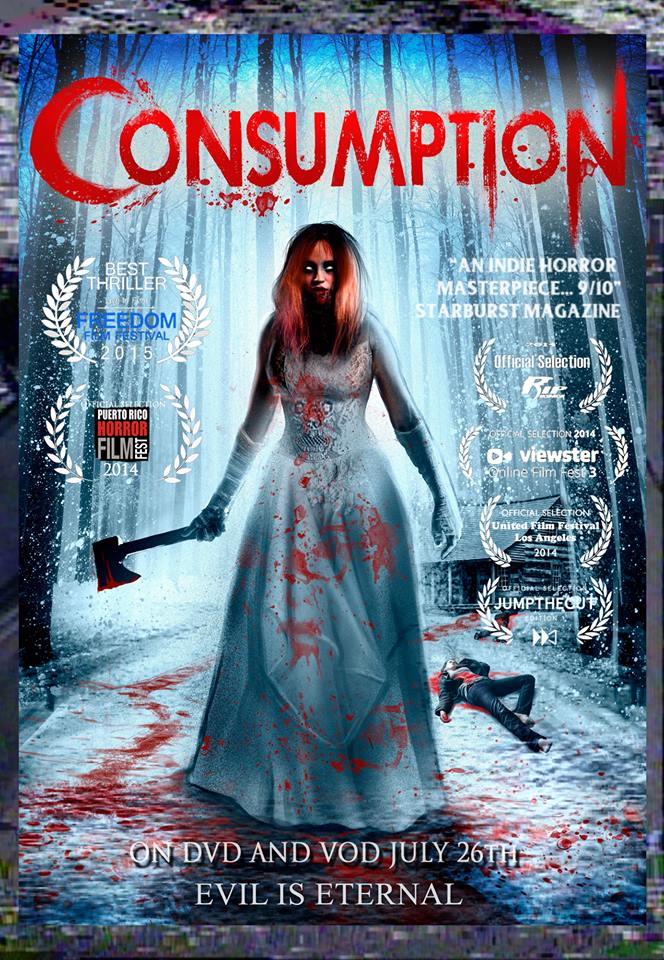 Since the film’s award-winning world premiere on the festival circuit, Consumption has been praised by critics.  Famous Monsters described the feature as a “gruesome goulash of ghosts, cults and good ol’ demons”, and Starburst Magazine has given it a 9/10, calling it an “indie horror masterpiece”.

Synopsis: A group of friends travel to the snowy Utah mountains for a weekend retreat. One brings with him a dark secret that could destroy their lives forever. As they prepare to face an ancient secret buried in the woods outside their winter resort, an unstoppable evil begins to grow, consuming them one by one.

The film stars Arielle Brachfeld (“Axeman of Cutter’s Creek”, “The Haunting of Whaley House”) – who won Best Actress at the R.I.P. Festival where the film premiered for her portrayal of the tortured Mallory – Chris Dorman (“8.13”), Sarah Greyson and David Lautman. The ensemble principal cast is supported by Nancy Wolfe (“Helter Skelter”, “Mark of the Witch”) and Maria Olsen (“Starry Eyes”, “Southbound”, “I Spit On Your Grave: Déjà Vu”).

Personal demons, addictions, or a skeleton in the closet is something everyone possesses whether minor or horrific.  Four friends struggling with their own vices, take a vacation to a Utah resort in hopes of clearing their minds, mending their relationships, and simply getting away from the hectic city life.

CONSUMPTION jumps right into each character’s struggle and avoids any long introductions which is gets the audience’s attention from the get go.

Seth (David Lautman) is odd from the first moment we meet him. He shares a creepy ghost story and randomly spits out that his mom died.  He’s very possessive over his luggage and won’t let anyone touch it.

Becca (Sarah Greyson) is Seth’s girlfriend and she’s the nice girl that’s mixed up with a strange boyfriend.  Becca wants to help everyone and she’s the most eager to figure out why things are happening and going wrong.

Mallory (Arielle Brachfeld) in the beginning is sarcastic and fun, her character is the most complex as she has her own struggles which progressively get worse. She’s also the most caring to her friends and her boyfriend Eric. 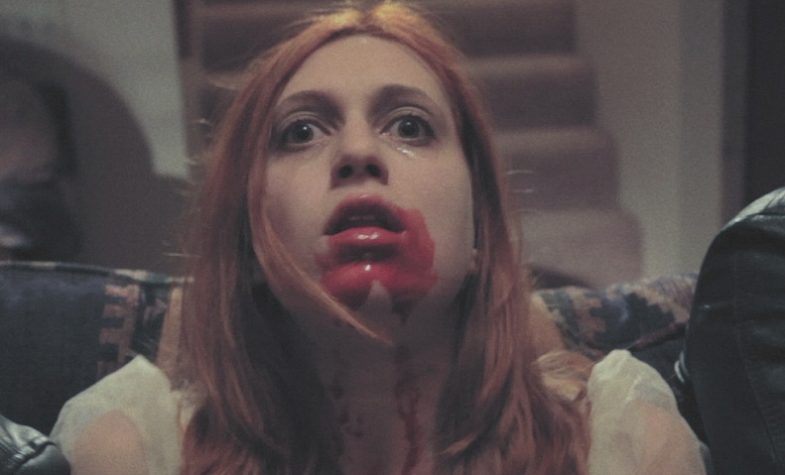 Mallory is very likeable and Brachfeld did outstanding job at the role, as she won the Best Actress award at the 2014 Los Angeles RIP Horror Film Festival.  Brachfeld shared her experience playing the role of Mallory.“I think the character was just so lonely. She wanted that connection, that love. To be loved by her friends and her boyfriend. I remember that awkward age when you’re just beginning to get involved in serious relationships. It’s scary. You love someone and will do anything for them because you’re caught up in that adventure and emotion. I’m just grateful I had such great actors and filmmakers to work with. The shoot schedule and weather were super challenging. Without having a great group of people to shoot with, it wouldn’t have been such a great experience. In general working on CONSUMPTION was such an enjoyable film to make. It was hard as hell, between the weather and the shoot schedule, but we were just out in the middle of freaking Utah making a movie.  Just artists bringing this story to life.” 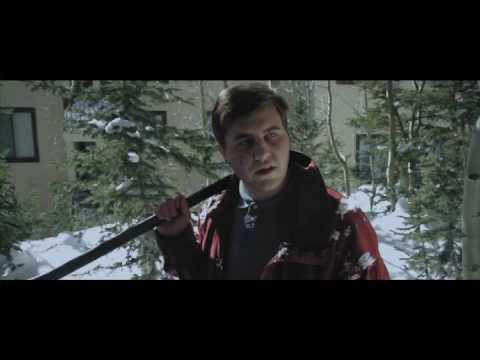 Creepy, yet funny in a strange way is the over the top religious couple that watches over the resort.   They’re not happy when Mallory tells them she’s an Atheist, which in return has them flooding the area outside the condo with crucifixes.

(Spoiler Alert) Soon, it’s no secret that Seth’s dead mother was killed by him when he takes her body parts out of the luggage.  The others don’t know he’s a killer and shortly after he buries her body parts the mother Sue (Maria Olsen) shows up at the condo.  Seth is shocked, but yet, seems like a hint of him is not surprised that she’s present.

With each characters story emerging and tensions beginning to rise quickly, there’s moments of horror that lets your imagination experience their mental and physical pain.  They need to stick together to get through the nightmares, but trusting each other diminishes quickly. 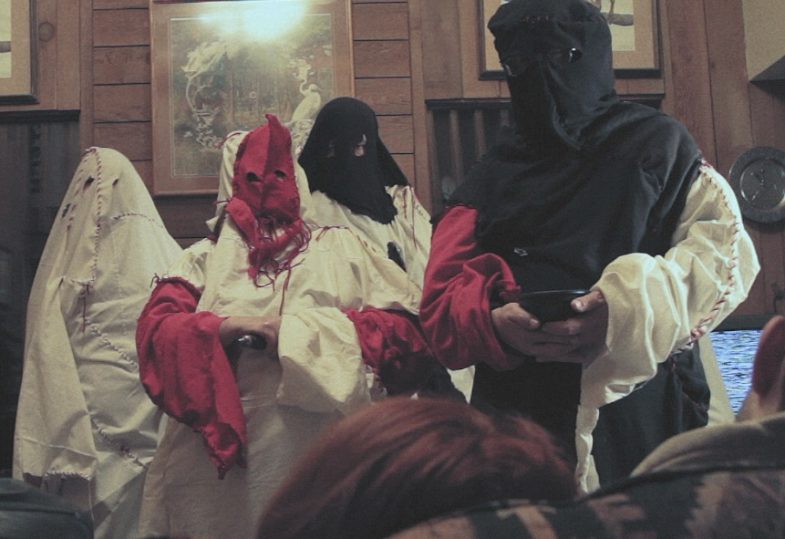 As the film approaches the climax, it gets extremely psychedelic, disturbing, and strange.  Including the scene where the religious cult uses Seth, Becca, and Mallory for their ritual, which ends up backfiring with deadly results.

CONSUMPTION is worth checking out.  The characters stories and struggles will keep your interest throughout the film.  Not to mention the mind-altering sound effects that will surround you and draw you into the scenes even more.

The DVD release of Consumption will include a feature length commentary with writer-director Brandon Scullion and a behind the scenes featurette.