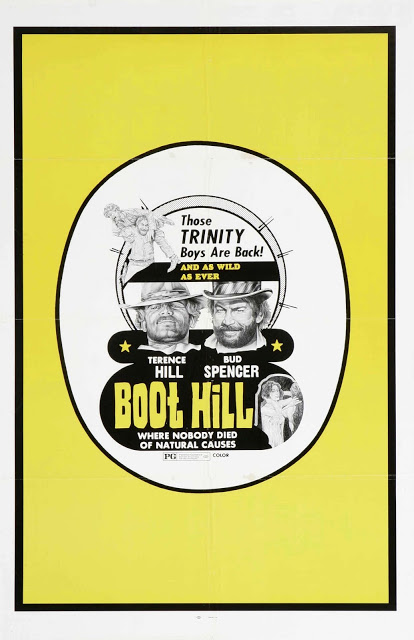 Boot Hill is such a different film to the popular ‘Trinity’ films amongst which it was lumped, presumably by the American distributors keen to attract the same appreciative audience, that it often disappoints those who are expecting more of the same. In fact it stands well as a serious Western in own right, perhaps not at the very front rank of the genre, but an above average Spaghetti outing, both in direction and casting.

Director Colizzi conceived the film as the third in the loose trilogy which features Hill as Cat Stevens (the other two films being Dio perdona… Io no!/ God Forgives – I Don’t! (1968) and I Quattro dell’Ave Maria, / Revenge at El Paso (1968). In this movie Hill, Spencer, and Stander are all excellent with none of the jokey humour which made the official Trinity films so distinctive and, for this viewer anyway, a little forced. Strode is outstanding and makes one wish that Hollywood had made more of his talents as muscular leading man. Too often one associates him with his mute, opening appearance in Once Upon a Time in the West, or in Ford’s stagey Sargeant Rutledge, and forgets how easily he can carry the action for more than one scene. His later encounter with Stevens, while Hill hides out (‘I don’t like to thank a man too many times’) is one of the best scenes in the film. Although race is not an issue in the film, the American trailer makes play in that ‘two colours’ are fighting against one threat, and the austere pairing of Hill and Strode – noticeably seen in single shot at the climax of the film – is electrifying.

The biggest weakness of writer-director Colizzi’s film lays in the middle section, when the chronology is rather truncated, although even here the growing rapport between Stevens and Thomas is effectively conveyed by way of compensation. One would have appreciated seeing more of the dissolution of the circus, the debilitating effects of the murder of the acrobat on the troupe.. Meanwhile,the late introduction of Hutch (the essential other half to the expected Trinity pairing) gives plenty of time for an on-screen bond to form and, once the new group re-encounter the show, a real sense of mission has been formed. Such difficulties are partly the problem of a script which attempts too readily to combine showbusiness and showdowns in equal measure. The fault lines in Boot Hill are perhaps best described by the music, which ranges from Bullitt-like suspense riffs, through to a sentimental ‘circus’ tune to a third, decidedly ‘epic’ theme for the friendship of Stevens and his black comrade.

Perhaps the most interesting aspect of Boot Hill is Colizzi’s inventive use of cross cutting between circus and gunfight, editing between ring and revolver as it were. The most notable example of this occurs at the beginning, when Stevens is stalked outside of the performance tent. By interweaving the dangers of the high wire with more immediate dangers faced outside, Collizi achieves a timing and balance which, in a sense, is as impressive as those inside the big top. Life – at least as shown in Boot Hill – thereby becomes kind of dangerous act of its own, and Colizzi heightens this sense through his shaping of his visual materials. Some critics have compared the acts in Boot Hill to the kind of medieval pageant served up for warlords centuries ago – especially when the troupe perform in front of head villain Honey (a surprisingly underwritten part for Victor Buono); I prefer to see it as a heightening of the tension inheirent in Western action, a different play on the skilful rituals involved.

Interesting comparisons might be made between this film and others where circus play intrudes into otherwise conservative genres (Vampire Circus springs to mind as a similar example) creating an interesting hybrid. Cukor’s Heller in Pink Tights – highly rated by French Critics, less well liked at home – would make an interesting double bill with Colizzi’s production, which is in need of some reassessment.