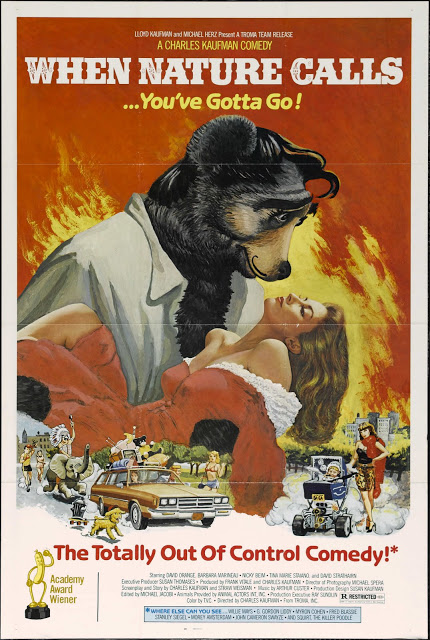 When Nature Calls (1985) was a film made by Lloyd Kaufman’s brother. He made several films for Team Troma during the late seventies and early eighties. This was one of his last films. According to him, he wanted to make movies until they didn’t make a profit and it wasn’t worth doing anymore. He said this during the production of Mother’s Day. Several years later and a few more films under his belt he was still directing.

The movie begins with several fake trailers (Baby Bullets, Raging Bull#@%! “A Martin Snoreasy Production, and a film for blind people). The feature film is called The Outdoorsters. An all-American family with All-American problems. They decide to move out of the big city and live in the country. But the wildlife ain’t all that it’s cracked up to be. This crazy comedy is filled with numerous sight gags, dated humor and corny jokes. One of the best jokes in this film revolves around “Wee-Jun” from the Ka-o-pec-Tac tribe! (played by David Strathian).

A Troma production through and through. Too bad Charles Kaufman ‘retired” from the movie business. He should have went one and made several more comedies. But he left us with Mother’s Day, Ferocious Female Freedom Fighters to name a few.