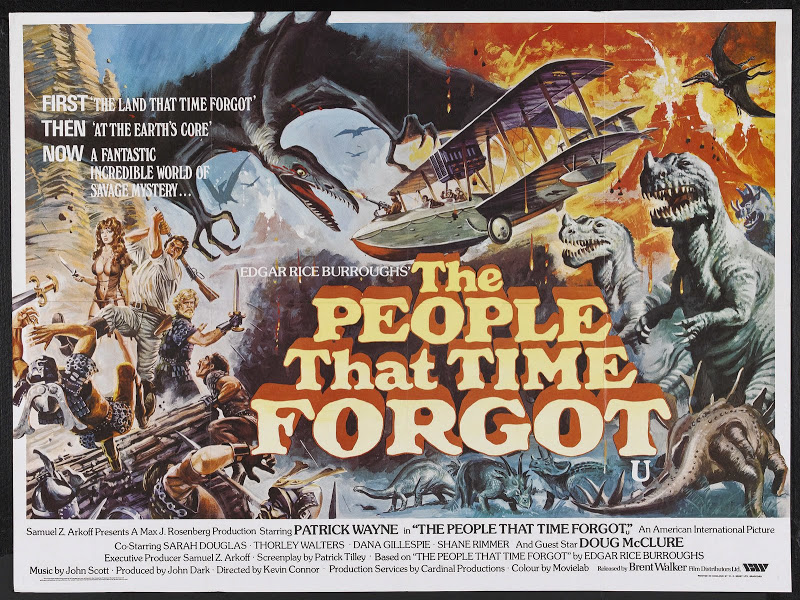 The People That Time Forgot is directed by Kevin Connor and adapted to screenplay by Patrick Tilley from the novel of the same name written by Edgar Rice Burroughs. it stars Patrick Wayne, Sarah Douglas, Dana Gillespie, Thorley Walters, Shane Rimmer and Doug McClure. Music is scored by John Scott and cinematography by Alan Hume.

A sequel to The Land That Time Forgot, plot finds Wayne as Major Ben McBride who arranges a mission to go and search for his missing friend Bowen Tyler (McClure). As the party go beyond the Antartic wastes they find themselves in a world populated by prehistoric creatures and primitive tribes.

There are a group of film fans of a certain age that were exposed wilfully to the joys of Kevin Connor and Doug McClure Creature Features, the four pictures made with low budgets (see also The Land That Time Forgot 1975, At the Earth’s Core 1976 & Warlords of Atlantis 1978) were simply put together with a standard structure of humans discovering an unknown land, who then encounter beasties and savage races and then try to escape said world of wonder. Back then in the 70s with youthful eyes these films were magnificent things, we didn’t care about clunky animatronics and miniatures, staid dialogue and poorly constructed scenes of men grappling with a man in rubber make up. Nor did us boys pay any attention to the considerable heaving bosom factor, which is here supplied with a different kind of wonder by Dana Gillespie! But they are a group of films that once loved, is a love that lasts forever, yes, it’s true love.

As it is, The People That Time Forgot is often thought of as the weakest of the four, yet it’s every inch the equal of “Land”, primarily because the cast attack the material with great spirit (Douglas is rather splendid and not just a posh girl with a pretty face), the film stock it’s shot on is of better quality and John Scott’s score is bursting with vitality. There’s also a ripper of a finale here, with the pyrotechnics department creating merry hell. Explosives aplenty. While the Santa Cruz de la Palma location used for the world of Caprona is perfectly bereft of civilised leanings. As with the other’s in the series, the ideas at the heart aren’t fully realised because of the budget restrictions, so we basically get some talk between characters, then a fight with a beast, some more talk, another fight with a beast, a meeting with a uncivilised tribe, a fight with a beast, and on it goes until the derring-do escape. There will be peril and actually this one has a very noteworthy turn of events that might surprise a few of the uninitiated.

1977 of course was the year of Star Wars and Close Encounters of the Third Kind, which changed things considerably in the creature feature/sci-fi fantasy stakes. Thus the Connor/McClure movies were relegated to being antique relics of monster malarkey cinema. Yet still they retain a quaint uniqueness, they are able to continually imbue many of us with waves of nostalgia, taking us back to a time when the likes of Connor made fantasy films with love and basic tools. The Land That Time Forgot was badly adapted to film in 2009 (C. Thomas Howell directing and starring), which begs the question on why Burroughs’ Caspak trilogy has not been taken on by a big studio? As yet the third part of the trilogy, Out of Time’s Abyss, has not received a filmic adaptation, can you imagine what someone like Spileberg could do with Burroughs’ wonderful source ideas?

Ah well, we can but dream, in the meantime we will happily make do with our cheesy antiquities