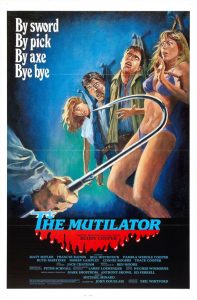 In my mind, this film captures perfectly the essence of an 80’s slasher film! Violent, over the top gore, cheesy dialog and acting, and an ominous setting all make this film stand as a model for a decent slasher flick.

In an unique plot, a young boy accidentally shoots and kills his mother on his father’s birthday. The father never forgives his young son, and years later, he sends him a letter telling his son that he needs to go to their beach house to close it down. The son decides this would be a good getaway for him, his girlfriend, and two other couples. Unbeknowst to them, the father is waiting at the beach house with an array of garden and fishing instruments ready for use on the teens.

To get the full effect of this film, you HAVE to see the unrated version. This is crucial, as the rated R version cuts out much of the gore and the lighting is terrible. To say this is a gory movie is the understatement of the year. The unrated version holds nothing back, and this film contains one of the most disturbing deaths (the fishhook!!) in slasher flick history. I also like the dark, foreboding mood of the flick. The deserted beach fronts makes for a spooky, tense setting.

This film is often criticized for the acting and cheesiness of the dialog; in my opinion, those things come with the genre. Overall, I would recommend this flick to any horror fan, particularly younger ones who have been turned on to the genre by recent flicks such as “Hostel” and “Wolf Creek.” You will see where many of the current slasher flicks got their roots.