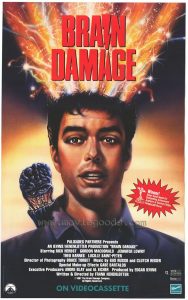 Frank Henenlotter’s ‘Brain Damage’ (1987) is easily the director’s best film, esp. when considering the solid performances, technical proficiency and fascinating storyline. Aylmer, a rather large, penis-shaped parasite, gives unsuspecting Brian brain damage by getting him hooked on an hallucinogenic, blue fluid that Aylmer himself produces. Oh, the colors! But the thousand-year-old worm-like parasite demands something in return for the buzz – human brains! Aylmer and his actions seem to be a metaphor for drug use and addiction and convey very graphically how substances foreign to our bodies can alter our own thoughts and actions.

Henenlotter adds context and meaning to the proceedings by creating a history for Aylmer. The parasite was sold and stolen over the centuries, until it finally ended up in the possession of Brian’s neighbors. But the neighbors deprived Aylmer of his needs in order to keep him weak, and that’s where the story begins. Henenlotter’s films are never without heavy doses of sick humor, and the perverse highlight here is a sequence depicting a disco-whore getting her brains screwed out – literally – through her mouth. If that’s not enough, the special effects in the restaurant scene, complete with spaghetti and brainballs, are particularly polished and satisfying. Ultimately, the director outplays his hand and is left with nowhere to go. Despite this weak ending, ‘Brain Damage’ is an odd, effective story and film, a major step up from the director’s debut, ‘Basket Case’, but every bit as twisted.