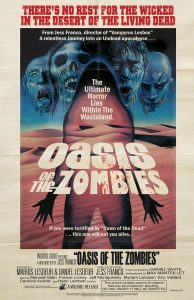 This is Jesus Franco’s addition to the zombie boom of the early 80s. He may be an exploitation director but is more a sleaze-monger than an out and out horror film-maker. In this respect he is similar to Jean Rollin, who was also roped into making a zombie film at the time. As a result, Franco’s Oasis of the Zombies and Rollin’s Zombie Lake are among the worst zombie films ever made.

The film begins with a couple of young women in tight denim shorts wandering around the cursed oasis while Franco goes into zoom overdrive. He zooms into all manner of irrelevant details throughout the movie. The girls are then attacked by the undead. The main story then unfolds. A WWII veteran knows the whereabouts of $6,000,000 of gold. He reveals that it is in the cursed oasis and is then killed by his partner, who wants it all to himself. The man’s son Robert subsequently reads his diaries and discovers the secret of the gold bullion. He then travels to Africa with some friends in search of the booty. Unfortunately, the gold is guarded by zombies who previously were the German soldiers who were transporting it through the Sahara before being ambushed and wiped out by an Allied force led by the Robert’s father.

There is a hypnotic effect evident while watching this movie. It is a result of the stultifying pace and the music. The soundtrack is certainly persistent. It has effectively been produced by someone with a Casio keyboard and no musical ability whatsoever. As I said, this, combined with the lengthy shots of people not doing very much at all, creates a hypnotic effect which, undoubtedly, will send some people to sleep. I thought it was kind of weird and, despite itself, occasionally effective. Hypnotic too, is the acting. Hypnotically rubbish that is. Worst of all is the actor who plays Robert. His remorse at his father’s death is laughable. He receives the news in a manner similar to a man who has just been informed that the lawnmower he ordered is not available in green, only in turquoise. His emotional response to his father’s death really is that inane. It has to be said that, as a central character, Robert is a complete cretin. Despite being warned about not going anywhere near the oasis, he leads his friends there anyway. Of course they are slaughtered. But Robert survives. And when asked if he found what he was looking for in the oasis he replies, ‘I found myself’. What the hell does that mean? His journey to the oasis of zombies could hardly be described as a voyage of self-discovery. Unless, of course, he means he discovered he was a moron who was responsible for the death of his friends through negligence and idiocy.

The flashback scene showing the battle between the British and Germans is fun. It is a cheese-tastic fight with men dying in a highly comedic choreographed fashion. These men subsequently become the zombies that haunt the oasis. No explanation, however, is given for the fact that they now sport early 80’s haircuts – perhaps this is an effect of 40 years of zombification? I’m no expert, so I accept that this is possible. If Adolf Hitler came back as a zombie perhaps he would resemble Dr. Hook.

As far as the blood and guts side of things is concerned, there is a limited supply. The women are killed in a somewhat sleazy manner (this is Franco after all) with the zombies slavering over them. The men are killed in a more perfunctory fashion. The make-up is pretty cheap and cheerful. Some of the lead zombies look half-decent but most look like men who fell asleep at a party and were ‘decorated’ by their drunken friends.