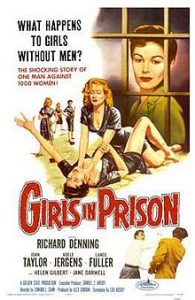 Dr. Rosemary Walsh, in the last months of a four-year sentence at a state prison farm after being convicted of a mercy killing, is taken hostage when gangsters Nick Morelli and Baldy break their molls Nellie and Jane out of the prison farm. Released on a country road, and determined to go back as she only has a month to serve, Rosemary comes upon a shack near a swamp and sets the broken leg of Luke Walker. When local doctor and plantation owner Steve Carey arrives, he quickly realizes that Rosemary is the escaped fugitive that the prison officials think was part of the plot engineered by Nick and Baldy. Steve takes her to his plantation and she resigns herself to the situation as she at least has a hiding place. She assists Steve in his lab work and goes with him on hunting and fishing trips, but there is soon gossip in the countryside and nearby towns that Doctor Steve has a woman living with him. Steve proposes marriage and she accepts and they go to the town clerk for a marriage