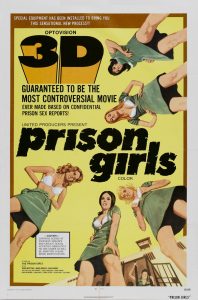 Obviously influenced by the success of films like THE STUDENT NURSES, this rather sleazy exploitation picture has six females getting a weekend furlong out of prison so that they can reconnect with their outside lives before getting released for good in a couple months. For the male viewer’s pleasure, all of the women in end in countless sex scenes. PRISON GIRLS is without question one of the wildest exploitation pictures I’ve ever seen. Yes, the story is stupid, the acting horrid and the filmmaking questionable but there’s no question that director Tom DeSimone has gone all out and really delivered one of the most nudity-filled films you’re ever going to see. In fact, there’s so much nudity here that it really does seem like you’re watching a XXX movie with just the hardcore stuff cut out. Even for a sexploitation picture this here is quite dirty because there’s very few scenes where some sort of nudity isn’t on screen. This is certainly a great thing for those male viewers watching. It also doesn’t hurt that the majority of the girls are all extremely good looking and unlike other pictures, we’re not just getting five or six women here but instead there are nearly two dozen that take their clothes off. This includes the final “segment” where Uschi Digard plays a woman having sex with her fugitive boyfriend. If you’re a fan of these types of movies then you know what Digard brings to the screen. The film also has perhaps the greatest shower scene in shower scene history. All sorts of naked women appear to really be going at it because you’ll notice all the bruises and marks that the “action” is leaving on them as the scene plays out. There’s also a memorable biker gang/rape sequence, which is just downright bizarre to say the least. PRISON GIRLS isn’t a masterpiece by any stretch of the imagination but if you’re a fan of sexploitation then it’s a must see.