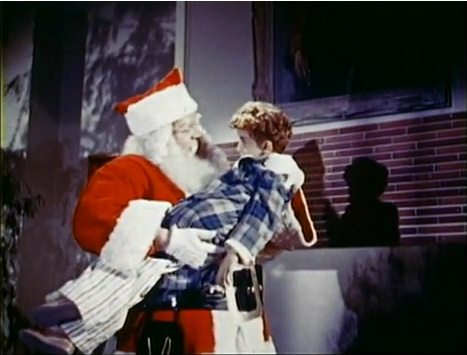 The producers packed every magical, wacky, and just plain weird, holiday oddity known to man in to this wild-n-wonderful, and strangely charming, children’s classic! It’s not enough that Santa must deal with the usual suspects – the good little boys and girls, and the not so good little boys and girls – but this season Lucifer himself is out to ruin Christmas and has sent his chief minion, Pitch, on a mission to Earth to turn all the children of the world against Santa. But wait, there’s more! Santa’s workshop is located high above the North Pole in a Toyland castle in outer space, where he plays the organ and keeps watch over the children on earth through specialized equipment, while readying his mechanical reindeer for Christmas Eve action. Santa also enlists the aid of Merlin the Wizard, who provides him with magic sleeping powder and a flower that makes one disappear. But wait, there’s even more! Santa also receives a magic key that will unlock any door on Earth from Vulcan himself!

Short Description: A wild and wonderful, and strangely charming, children’s classic! This holiday season Lucifer himself is out to ruin Christmas and has sent his chief minion to Earth to turn all the children of the world against Santa.