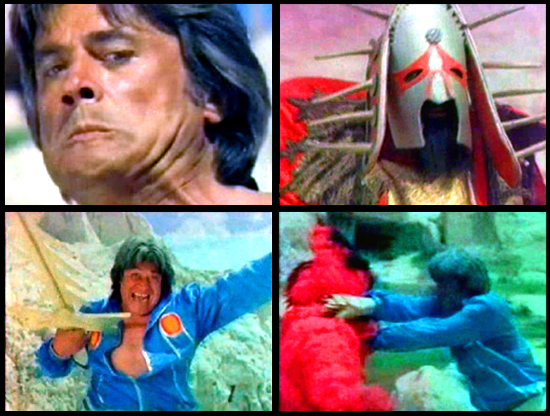 Dünyayı Kurtaran Adam (The Man Who Saves the World) is a 1982 Turkish-made adventure movie commonly known as Turkish Star Wars because of its notorious use of unauthorized footage from Star Wars worked into the film.

Directed by Çetin İnanç and written by Cüneyt Arkın, a well-known Turkish actor whose works span the last five decades, the film also starred Arkın in the leading role. Other actors include Aytekin Akkaya who later starred in the Italian film Sopravvissuti della città morta, as well as Hüseyin Peyda and Füsun Uçar both of whom remained in Turkey.

The film follows the adventures of Murat (Arkın) and Ali (Akkaya), whose spaceships crash on a desert planet following a battle, shown by using footage from Star Wars as well as Soviet and American space program newsreel clips. While hiking across the desert, they speculate that the planet is inhabited only by women. Murat does his “wolf whistle”, which he uses on attractive women. However, he blows the wrong whistle and they are attacked by skeletons on horseback, which they defeat in hand-to-hand combat. The main villain soon shows up and captures the heroes, bringing them to his gladiatorial arena so they can fight. The villain tells them he is actually from Earth and is a 1,000 year old wizard. He tried to defeat Earth, but was always repelled by a shield of concentrated human brain molecules, which looks like the Death Star from Star Wars. The only way he can bypass this impenetrable defense is to use a human brain against it. The heroes escape and hide in a cave full of refugees who already fled villain’s tyrannical rule. Murat develops a romantic connection with the only woman there (Uçar), who looks after the children (the romance is shown through many long eye-contacts and nothing more). Zombies of the dark lord attack the cave and turn several of the children into zombies. The three then flee the cave and find a local bar, lifted directly from Star Wars (the Mos Eisley Cantina). The two men quickly start a bar brawl, but the villain suddenly appears and captures them again.

The wizard separates the men and tries to convince them to join him. He sends his queen to seduce Ali, while he orders Murat to be brought before him. He offers Murat the chance to rule over the earth and stars if he joins him. He possesses the power of Earth’s ancestry in the form of a golden brain, and all he needs to conquer Earth is a real human brain. After Murat declines, the wizard shows that he has the woman and children in captivity. Enraged, Murat fights the wizard’s monsters and skeleton guardians. The noise causes Ali to abandon the queen and join the fight. They are disabled by laser-armed guards and are unsuccessfully tortured by the wizard. Finally, the wizard pits Murat against a giant monster in the arena. Murat defeats the monster and flees, taking the woman and the child with him. Ali is left in captivity.

Murat finds out about a sword made by “the 13th clan,” who melted a mountain thousands of “space years” ago. Murat later finds this sword, shaped like a lightning bolt, in a cave defended by two golden ninjas. He quickly dispatches the guards and takes the sword. Renewed by the sword’s power, Murat goes to free his friend from the sorcerer’s dungeon. Unfortunately, Ali is killed during the rescue.

Grief-stricken, Murat decides to melt down his golden sword and the golden human brain and forge them into a pair of gauntlets and boots. Girded with magical gloves and super-jumping boots, he searches for the sorcerer to avenge his friend’s death. After fighting monsters and skeletons, he comes face-to-face with his nemesis and karate chops him in half. The film ends with a speech about the human brain being the strongest weapon in the universe.
[edit] Soundtrack

The musical soundtrack is entirely lifted from popular hit movies. The main theme used is “The Raiders March”, composed by John Williams, from the 1981 film Raiders of the Lost Ark. Other scenes incorporated the music of Moonraker, Ben-Hur, Flash Gordon, Giorgio Moroder’s version of Battlestar Galactica, Planet of the Apes, Silent Running and Disney’s The Black Hole. In the scene where Cüneyt Arkın and Aytekin Akkaya find the graves of old civilizations, the director selected J.S Bach’s Toccata to play.
Release and reception

The film was a box office bomb[citation needed] and was never released in the United States. It was panned by critics and movie fans for its incoherent storyline, bad performances from its lead actors and shameless use of stock footage and music from other films.

The sequel was released on 15 December 2006. Some fans expressed their disapproval that the special effects were not similar to the original film, where all the space scenes were ripped directly from science fiction titles of the time such as Star Wars, the Star Trek series and Battlestar Galactica. Famous actors from Turkey, such as Mehmet Ali Erbil took part; Kartal Tibet directed.